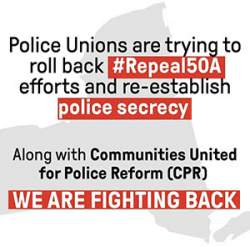 Last week, with the law firm Orrick, Herrington & Sutcliff LLP, we filed a motion on behalf of Communities United for Police Reform (CPR) to intervene in a lawsuit brought by five New York City police unions, as well as corrections and firefighter unions, that seeks to block NYC from publishing officer misconduct and discipline information and roll back the repeal of police secrecy law “50-a.” The unions sued the City earlier this month, after the New York State legislature repealed 50-a, which had shielded the records from the public, and the de Blasio administration announced plans to release a searchable NYPD misconduct database.

“We are not a legal organization but we are moving to intervene in this litigation because the stakes are too high,” said Anthonine Pierre, spokesperson for Communities United for Police Reform. “We led the historic campaign to repeal New York’s notorious police secrecy law 50-a and are disgusted to see that in just a few weeks since the repeal, police unions are using their outsized financial resources to attempt to roll back this important victory for transparency and democracy.”

On Wednesday, a Manhattan federal court issued two nationwide injunctions temporarily blocking the Trump administration’s “public charge” rules. An injunction issued against the Department of Homeland Security (DHS) prevents DHS from enforcing, applying, implementing, or treating as effective the “public charge” rule for any period during which there is a declared national health emergency in response to the COVID-19 outbreak. The ruling came after immigrant rights attorneys successfully argued that the COVID-19 pandemic has made the DHS public charge rule lethal to immigrant communities by chilling the use of healthcare and other benefits. The court also enjoined the Department of State from applying its parallel “public charge” rules, including the president’s health care proclamation, to applicants for visas at U.S. embassies and consulates abroad.

“Since the Trump administration announced the public charge rules, it has caused immense harm to our communities—harm that intensified, as our country is in the midst of a health crisis,” said Javier H. Valdés, Co-Executive Director at Make the Road New York. “The public charge rules by both DHS and DOS attacked our loved ones by imposing a racist wealth test on the immigration system, leaving working immigrants to choose between vital services or remaining together with their families.We applaud the court’s decision and will continue to fight to stop the Trump administration's reckless and inhumane attacks on immigrants.”

We commemorate Black August in a time of collective grief, clarity, rage, and rebellion. Mighty waves of popular uprising against the ravages of white supremacy and anti-Black racism are flooding the streets, rising within and outside of prison walls, and reverberating through communities and institutions. Upon centuries of enslavement and subjugation exists an intolerable present, where the state continues to wield violent force against Black people in the form of mass criminalization and incarceration, repression and militarized police brutality, and willful neglect and discrimination, only amplified in the face of a deadly pandemic. And so, Black people resist. First, to survive. And, like generations of ancestors before, to fundamentally alter our collective condition and make freedom real. This is the legacy of Black August.

Read the full statement on our Black August page.

The latest on the blog comes from Center for Constitutional Rights Associate Executive Director Donita Judge, who writes on the legacy of late Congressmember John Lewis, the importance of getting into “necessary trouble,” and remaining resolute in our faith, philosophy, and strategies amid mounting obstacles. Judge writes:

It was a chilly Sunday afternoon in the early fall of 1998 when I first met Congressman Lewis at the New Jersey Performing Arts Center in Newark, where he had come to promote his new book. We were all restless with anticipation of the discussion of his early life and subsequent years as a leader of the Civil Rights Movement. His stories were punctuated by memories of his childhood in rural Alabama, born to parents who were sharecroppers before purchasing a 110-acre farm and tending their own land. He recalled the advice his mother gave as he was leaving home, advice given by most Black mothers: “Don’t get into trouble.” As he continued to speak, the canvas he sketched before us revealed images of extreme brutality in the fight for equality and democracy. These brutal attacks were leveled by white people on Lewis and Black students, who simply asked to be treated equally and served and peaceful Black marchers in Selma by Alabama state troopers and police officers at the orders of the state governor and white state leadership. Looking back, Lewis was involved in all types of trouble - trouble he describes as “good trouble—necessary trouble.”