News: STARTING SOON! What to the Slave is the Fourth of July?

STARTING SOON! What to the Slave is the Fourth of July?

Today from 11 a.m. EDT to 12 p.m. EDT, join the Center for Constitutional Rights, The Dream Unfinished, and Lincoln Center for a live community reading of Frederick Douglass's speech, What to the Slave is the Fourth of July? The event will be hosted by Terrance McKnight and will feature guest readers from the worlds of classical music and activism, musical improvisation performed by violinist Curtis Stewart of PUBLIQuartet, and an interview with Donita Judge, Associate Executive Director of the Center for Constitutional Rights.

You can register on this form.The event will also be streamed on the Center for Constitutional Rights’ Facebook page.

Join us on Thursday for Liberatio Lunch Break to #FreeThemAll 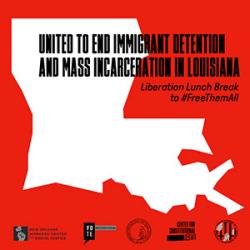 We will hear from advocates, organizers, and individuals who were formerly incarcerated in Louisiana prisons and detention centers and take action together to #FreeThemAll. The event is co-hosted by the New Orleans Workers’ Center for Racial Justice (NOWCRJ), Voice of the Experienced (VOTE), Families and Friends of Louisiana’s Incarcerated Children (FFLIC), and Immigration Services & Legacy Advocacy (ISLA). 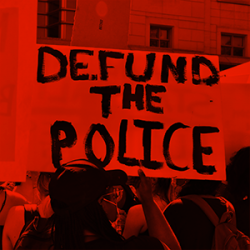 In response to the New York City budget that was passed by City Council July 1, the Center for Constitutional Rights released the following statement:

It is unconscionable that in a city with a $9 billion dollar deficit, the burden of the mismanagement of public resources should continue to fall on the shoulders of its Black, Brown, immigrant, and low-income communities. Year after year, city officials have caved to pressure from a bloated and overreaching police department. In the midst of twin pandemics — coronavirus and racist police brutality — the NYPD has failed to prioritize the needs of all New Yorkers and demonstrated a fundamental indifference to the plight of the city’s most vulnerable residents. This latest smoke-and-mirrors budgeting, shuffling $1 billion dollars from the NYPD to school policing, is a disturbing reminder of the city’s commitment to criminalizing its Black and Brown youth, further legitimizing the school-to-prison pipeline. ...

Last Monday, Louisiana Bucket Brigade Director Anne Rolfes appeared on Democracy Now!, joined by Reverend Gregory Manning, to explain recent efforts by corporate entities to criminalize Louisiana families’ First Amendment rights. After leaving plastic pellets, known as “nurbles,” on the property of oil and gas lobbyist Greg Bowser in December to protest the construction of Formosa Plastics, Rolfes and fellow environmental activist Kate McIntosh were charged with “terrorizing” under Louisiana Revised Statute 14:40.1, which carries a punishment of up to 15 years and a fine of $15,000.

“These charges have zero legal merit,” said Senior Staff Attorney Pam Spees. “They do not even pass the laugh test. We ask the District Attorney to look carefully at these arrests and reject the charges against these two dedicated advocates as soon as possible.”

“We thought it was really timely and really urgent to provide this evidence, not only to our state, but also to some of the lobbyists,” said Rolfes to Democracy Now’s Amy Goodman. “The lobbyists ought to reckon with the fact that they are destroying Black communities, a historic Black community, here in Louisiana.”