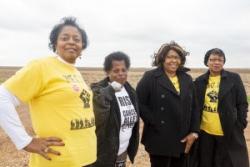 Last week, Judge Emile R. St. Pierre of the 23rd Judicial District Court upheld a temporary restraining order (TRO) allowing members of the faith-based grassroots community organization RISE St. James access to land, owned by Formosa Plastics, where enslaved people are believed to be buried. The TRO allowed RISE to hold a one-hour prayer service on the site of the cemetery on Juneteenth to commemorate the day that celebrates the liberation of enslaved people from chattel slavery.

Advocates note that this is an especially important year for Juneteenth commemorations, amidst the COVID-19 pandemic’s disproportionate impact on Black communities, and during the upheaval in response to ongoing police violence and killings of Black people. They describe ongoing police violence and demand for change as a consequence of the country’s failure to fully reckon with and account for the traumatic history of slavery and its modern vestiges.

Read more on our website. Learn more about the case on our case page. 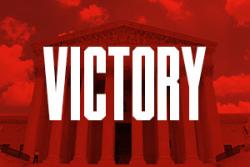 In response to last Monday’s ruling by the U.S. Supreme Court in R.G. & G.R. Harris Funeral Homes v. Equal Employment Opportunity Commission and Aimee Stephens, to which we submitted a brief to the Supreme Court on behalf of more than 45 grassroots LGBTQ+ rights organizations, we applauded the decision and issued the following statement:

The Supreme Court’s decision makes it clear that, despite the Trump administration’s wishes, discrimination against LGBTQ+ people is not state-sanctioned, it is prohibited by federal law.

We also celebrated the DACA victory  Thursday in which the Supreme Court ruled that the Trump administration’s attempt to end DACA was arbitrary and capricious. Their surprise ruling, the second major defeat for Trump in a week, protects hundreds of thousands of DACA recipients from the threat of deportation. We want to send huge congratulations to all of our partners, allies, and clients who have fought this fight for so long, in particular those at Make the Road New York, who brought the New York DACA case and who are at the forefront of so many important struggles and wins for immigrant communities in the time of Trump. We will continue to support them and fight to protect immigrant communities from the racist, xenophobic, and inhumane immigration system.

For more information on the LGBTQ+ case, visit our resource and case pages. Learn more about our immigration work here.

Join us on Zoom From Stonewall to Minneapolis: Fighting for Black, Queer, and Trans Liberation (and Winning!) 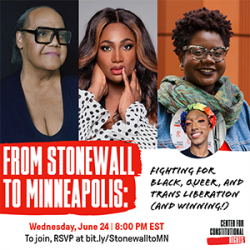 Join us Wednesday, June 24, 2020 at 8:00 p.m. for CCR’s virtual pride event featuring Stonewall legendMiss Major Griffin Gracy, author and activist Hope Giselle, and 8toAbolition co-author K Agbebiyi, LGBTQIA+ leaders who are on the forefront of the fight for racial justice, trans justice, and abolition. The conversation will be moderated by Communications Assistant Alex Webster. Our panel discussion will celebrate and reflect on the work that is currently being done to center Black queer and trans folks in the movement today and the path forward toward Black, queer, and trans liberation. You won’t want to miss it.

Learn more and RSVP at bit.ly/StonewalltoMN!

Listen: Abolition & Organizing in the time of COVID-19

What do we mean when we talk about prison and police abolition? In the 27th episode of “The Activist Files,” our Advocacy Associate maya finoh and Samah Mcgona Sisay discuss their personal definitions of abolition; the ways in which prison abolitionists are using this particular moment to amplify their dreams of a world without cages; how prisons, policing, and surveillance serve as threats to the public health of low-income communities; and the unique experiences of Black immigrants, trans women, and survivors of domestic/sexual violence in the U.S. criminal legal system.

Listen to the episode on our website. This is the last of a four-part series of blogs about the movement response to COVID-19. Check out the rest of maya's series.