News: a week of victories, struggle, and love Inbox

Releases from ICE detention in Louisiana!

Nearly all of our medically vulnerable clients in ICE detention in six Louisiana facilities were released out of concerns for their lives and health amidst the COVID-19 pandemic. A federal judge ordered their release two weeks ago after they filed for emergency release out of fears that contracting the coronavirus while in overcrowded and unhealthy facilities could lead to life-threatening infections. While praising the release of these individuals, advocates condemned the ensuing deportation of three of them and the continued detention of one individual who had filed for emergency release, and demanded that ICE voluntarily release additional people in the agency’s custody. The case is Dada v. Witte, and was filed together with the National Immigration Project of the National Lawyers Guild and local counsel. Learn more. 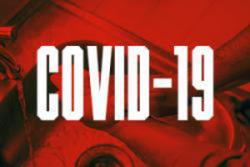 In a seven-hour evidentiary hearing last week, attorneys representing people imprisoned at the East Baton Rouge Parish Prison in Louisiana urged a federal judge to order the immediate release of certain medically vulnerable people, amidst an outbreak of COVID-19 infections at the prison. Advocates fighting for the release of the medically vulnerable individuals say that the window for protecting them from life-threatening infection is a matter of days, not weeks, and pushed for a temporary restraining order requiring the release of those most at risk due to age or pre-existing health conditions.

Advocates describe the risk of life-threatening COVID-19 infections inside the prison as a threat to Black lives; recognizing that mass incarceration itself is a public health crisis. Pointing out layers of racial disparity, they note the disproportionate impact of the criminal legal system on Black people, and that Louisiana is considered the incarceration capital. Black Louisianians, in general, have died of COVID-19 at 2.65 times the rate of other races, and 79 percent of the estimated 1,200-person prison population at East Baton Rouge Parish Prison, in particular, are Black.

We honor Juneteenth—the celebration of the end of chattel slavery in the U.S.—by envisioning a world freer than the one in which we currently live. This moment of both protests against police violence and the novel coronavirus demands that we commit to rejecting all harmful value systems, ideologies, and institutions. We must also demand accountability and reparations for harm committed in the name of upholding an immoral hierarchy of human life. The prison-industrial complex serves as the current manifestation of anti-Blackness globally. In the spirit of slavery abolitionists and the ongoing Black freedom struggle, we commit to its abolition.

The Center for Constitutional Rights marks this extraordinary moment of protest and hope with a week of art, culture, and commemoration centering Black voices and demands for justice, accountability, and freedom. The ratification of the 13th Amendment in December 1865 did not abolish all slavery in the U.S., and instead explicitly permitted slavery in prisons. Today, the prison-industrial complex and the epidemic of policing and caging Black and brown bodies serve as the current manifestation of global anti-Blackness. Our Juneteenth week includes the release of our Juneteenth statement; discussions of prison abolition and visions of a world without cages; a showing of “The Black Power Mixtape 1967-1975” as part of our Freedom Flicks series; and a joyous musical celebration of Black liberation on Instagram Live. On Juneteenth itself we will join RISE St. James for a commemoration of the lives of enslaved people buried in Louisiana at a gravesite threatened by the construction of a Formosa Plastics factory. In solidarity with freedom fighters everywhere, the Center for Constitutional Rights engages in the liberation struggle with joy, honesty, and love. Learn more.

Last week, New York State passed three critical pieces of legislation for holding the NYPD and other forces in the state accountable for brutality and anti-Black policing, and the governor signed them into law. The Safer NY Act comprises the Police STAT Act, the repeal of 50-a, and the creation of a special prosecutor.

“Today we celebrate the passage of several critical bills that will lead to increased transparency, police accountability, and justice, which would not be possible without the hard work of visionary and unrelenting community members, leaders, and activists, particularly numerous family members of Black and brown people who have been murdered by police in New York. While New York has taken several key steps in the right direction, we must remain unwavering on our commitment to justice and keep on the path toward building a safer and more just world for our most marginalized communities,” said our Bertha Justice Fellow Lupe Aguirre.

The Center for Constitutional Rights is a member of Communities United for Police Reform, which, together with the Safer NY Act Coalition, worked for years to get us to this day. 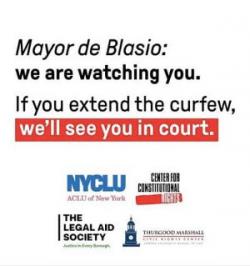 Last week, we told you about our request to the court to investigate the NYPD’s curfew enforcement, and that is still pending. Criticism continued to mount over the way the police were using the curfew as an excuse to attack protesters. The Center for Constitutional Rights, The Legal Aid Society, The New York Civil Liberties Union, and the Thurgood Marshall Civil Rights Center threatened to sue on behalf of Black and LGBTQIA-led organizations, protesters, medical workers, and legal observers, including Take Back the Bronx, the Malcolm X Grassroots Movement, and FIERCE, if the curfew was extended beyond last Sunday. The mayor conceded. Read our statement here.