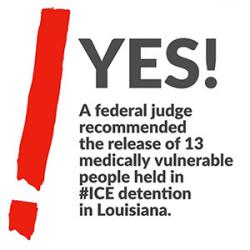 On Thursday evening, a federal judge recommended the release of 13 medically vulnerable people in Immigration and Customs Enforcement (ICE) detention in Louisiana. The 13 are among 15 people with serious health issues that make them particularly susceptible to developing life-threatening COVID-19 symptoms. The 15 filed an emergency petition for release from six ICE detention facilities in Louisiana last month. The six facilities are notoriously overcrowded, unhealthy, and lack adequate medical care and expertise. Attorneys praised the release of the 13 individuals, but warned that continuing to detain the remaining two amounts to a potential death sentence for a civil immigration violation. The magistrate judge’s opinion is a recommendation that must be accepted by the district judge to become final.

“No one deserves to die from COVID-19 because of government abuse and indifference,” wrote lead plaintiff Tatalu Helen Dada, who is studying to be a nurse and who the court recommended be released, in an op-ed. “The government has a duty to adequately and humanely care for those it has taken and detained. During this pandemic, that means releasing me and others whose lives and health hang in the balance.”

“I am scared of dying in here,” said Bakhodir Madjitov, who has been detained by Immigration and Customs Enforcement (ICE) since 2017. “What will my family do? When ICE suddenly detained me, my wife Madina was 39 weeks pregnant with my littlest child…. I have only ever seen my son once, through the glass at a detention center. I have never been able to hold him in my arms. My wife and three little boys were barely managing without me before COVID-19. Now, everything is much worse.”

Late Tuesday night, we filed an emergency petition and temporary restraining order for the release of medically vulnerable people currently held in ICE detention, all of whom have been held by ICE for over one year and some as long as nine years. The filing seeks the release of 18 people being detained in Unit 9 of the Etowah County Detention Center in Gadsden, Alabama, and cites their severe risk of contracting the novel coronavirus COVID-19 and developing life-threatening symptoms. Other medically vulnerable immigrants have filed petitions for release in other states, with courts ordering releases from other ICE detention centers. The filings in each case warn that the near-certainty of coronavirus outbreaks in these facilities renders the continued detention of these individuals a potential death sentence for a civil immigration violation.

From the blog: They say a picture is worth a thousands words. Sometimes, it screams only one: Torture.

The latest from our blog: Advocacy Program Manager Aliya Hussain reflects on the legacy of torture and abuse at the Abu Ghraib prison in Iraq.

Sixteen years ago, CBS 60 Minutes II broke the news, revealing a trove of graphic images that demonstrated in shocking detail “the horrific torture and abuse of Iraqi detainees in U.S. custody,” writes Hussain.

“The photos continue to serve as a dark reminder of an unfinished chapter of American history, while memories of what happened during those dark days continue to haunt those who survived them. ’It never really left me,’ says our client Salah al-Ejaili, adding ‘I have nightmares where I’m falling into a hole, where I have a bag over my head.’ In 2008, he and other Abu Ghraib torture survivors filed a federal lawsuit, Al Shimari v. CACI, against private defense contractor CACI, Inc. for its role directing and participating in illegal conduct, including torture, at the prison where it was hired by the U.S. to provide interrogation services.”

Read the full piece on our blog.

Photo by Chris Bartlett from an installation at NYC’s Photoville, September 2014.

In a letter to the editors of The Atlantic, Senior Staff Attorney Wells Dixon responds to “The 9/11 Era Is Over” written by Ben Rhodes, former deputy national security adviser to President Barack Obama. In it, Rhodes argues that “as COVID-19 has transformed the way that Americans live, and threatens to claim exponentially more lives than any terrorist has, it is time to finally end the chapter of our history that began on September 11, 2001.”

Dixon writes “No, the Post-9/11 Era Is Not Over.” While he agrees with Rhodes that the U.S. response to the 9/11 attacks has done more harm than good, he points out Rhodes’s failure to acknowledge the Obama administration’s role in failing to remedy, and in some instances augmenting, those missteps, particularly the failure to close the Guantánamo Bay prison.

“The post-9/11 era has not ended for the 40 men who remain at Guantánamo Bay—28 of whom are not currently charged with a crime—or for their loved ones, who may struggle to remember their faces after a generation of absence and loss,” says Dixon.

“Ending the post-9/11 era requires decisive action, including closing the prison at Guantánamo Bay,” he adds. “We therefore must look ahead to the future, to a new administration, to bring an end affirmatively to the post-9/11 era. This can happen only through deliberate action rather than the passage of time and the onset of a global pandemic.”

Read the full piece and Rhodes’s reply on The Atlantic’s website.