News: ICC gives the green light to investigate U.S. crimes related to the situation in Afghanistan

ICC gives the green light to investigate U.S. crimes related to the situation in Afghanistan

On Wednesday, the Appeals Chamber of the International Criminal Court (ICC) reversed a decision by the Court’s Pre-Trial Chamber denying the ICC Prosecutor’s request to open a formal investigation into crimes committed in connection with the conflict in Afghanistan.

The investigation will now proceed into alleged crimes against humanity and war crimes by U.S. armed forces and members of the CIA, the Taliban and affiliated armed groups, and Afghan government forces — including those committed as part of the U.S. torture program — in Afghanistan and on the territory of other States Parties to the Rome Statute implicated in the U.S. torture program.

Learn more about this historic development on our website.

On Thursday, an appeals court blocked the Trump administration’s asylum transit ban from being applied to thousands of asylum seekers who were unlawfully prevented from accessing the U.S. asylum process before the ban was put into place.

The decision lifts a stay of the district court’s preliminary injunction that prohibits the government from applying the asylum ban to those who had been illegally metered before the ban went into effect. The court found that the government failed to demonstrate that it would suffer irreparable harm if the injunction were to go into effect while the court reviews the merits. The court also found that the government is unlikely to succeed in that appeal — that is, it is unlikely to demonstrate it had no duty to grant access to the asylum process to individuals metered prior to the implementation of the asylum ban. 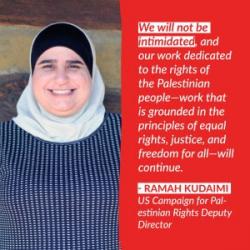 On Thursday, the US Campaign for Palestinian Rights (USCPR) moved to dismiss a meritless lawsuit filed against it by the Jewish National Fund (JNF) and several individuals. Human rights attorneys say the lawsuit targets USCPR’s support of Palestinian rights and is intended to chill them from engaging in constitutionally protected advocacy.

“The fact that we’re under attack is no surprise: human rights defenders around the world are under attack from repressive regimes and their allies. This lawsuit is part of this global, right-wing assault on civil society and movements seeking to build a better future for all,” said Ramah Kudaimi, US Campaign for Palestinian Rights Deputy Director. “We will not be intimidated, and our work dedicated to the rights of the Palestinian people—work that is grounded in the principles of equal rights, justice, and freedom for all—will continue.”

Tickets on sale NOW for the Social Justice Throwdown

Mark your calendars for our signature community event! We'll be celebrating our movement partners, uplifting our freedom dreams, and throwing down, together. Dancing. Live music. Food. Fun. We look forward to seeing you there!

Tickets are on sale NOW.