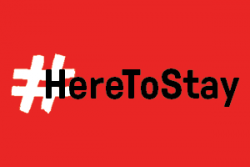 We filed a petition in the U.S. District Court for the Southern District of New York (SDNY) Tuesday for a preliminary injunction in Make the Road New York v. Pompeo, the first federal lawsuit seeking to jointly block three interrelated public charge rules promulgated by Trump and the State Department.

These interrelated rules seek to wholly transform the United States’s longstanding family-based immigration system into a system that favors the wealthy and discriminates against people of color. These radical proposed changes violate the immigration statutes and the Constitution.

“The Trump administration’s public charge tests are racist and unlawful,” said Javier H. Valdés, Co-Executive Director of Make the Road New York. “We urge the court to put a full stop to any attempts to impose these racist wealth tests on our immigration system.”

Learn more on our website. This case is related to a similar case, Make the Road v. Cuccinelli, in which we are challenging a Department of Homeland Security rule that would impose the wealth test on immigrants in the U.S. seeking lawful permanent resident status (i.e., green cards).

On Tuesday, residents of St. James called on the St. James Parish Council to rescind its decision to allow FG LA, a member of the Taiwanese-based company Formosa Plastics Group, to build a massive chemical facility in a predominantly Black community. At the Council’s regular meeting, lawyers from the Center for Constitutional Rights and Earthjustice representing the community group RISE St. James and advocacy organization Louisiana Bucket Brigade pointed to new and alarming information about the proposed complex. Among the issues raised were the levels of cancer-causing chemicals the facility would emit; the company’s failure to follow through on its promise to alter its layout to lessen exposure to school children and residents nearby; and its failure to alert Parish officials and residents of the existence of graves of enslaved people.

“It is no exaggeration to say that this facility presents an existential threat to the surrounding communities, who have already borne a heavy toxic burden,” said Senior Staff Attorney Pam Spees. “It’s not too late — the council must do the right thing now to prevent irreparable harm in the present and to begin to reckon with the past in ways that honor those who suffered immeasurably in the past under slavery.”

The Parish Council meeting can be watched on RISE St. James’s Facebook page.

Welcome to our three new board members! 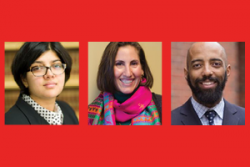 We are happy to announce the addition of three new members to our board of trustees: Amna Akbar, Jumana Musa, and Vincent M. Southerland.

“Three new board members join our growing family at an auspicious moment in the arc of our organization’s history and at a crucial social and political juncture for this country,” said Katherine M. Franke, board chair. “I am certain that the addition of these exceptional people will strengthen our capacity to act with agility and compassion in support of our partners on the front lines.

Executive Director Vincent Warren said, “We are so fortunate and thrilled to be in community with these three renowned advocates. Few are more aligned with our core values and our mission of radical, movement lawyering. Their deep commitment to social movements, innovative ideas, and tireless pursuit of justice will be a guiding light in our future work.”