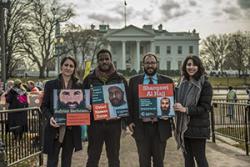 This coming Saturday will mark the 18th anniversary of the Guantánamo Bay prison, and the Center for Constitutional Rights will be co-sponsoring two events in Washington, D.C.  Marking this anniversary is always bittersweet: our clients are among the forty men who remain detained at Guantánamo; many were tortured, most have never been charged or convicted of any crime. Under the current administration, their futures remain even more uncertain. At the same time, more than a decade after the end of the CIA torture program, the full Senate Torture Report remains classified and not a single high-level official has been held accountable within the U.S. for these horrific crimes. But the anniversary is also a time to celebrate the community of movement partners and grassroots activists who have fought alongside us for years and stand in solidarity with the men at Guantánamo as we ensure that the prison never disappears from the public consciousness.

On Saturday, we will join Witness Against Torture, Amnesty International USA, the National Religious Campaign Against Torture, and others to rally for justice and demand the closure of Guantánamo and accountability for torture, and to connect the brutality, lawlessness, and impunity that defines the prison to so many of today's horrors. Following the rally, we will march from Lafayette Square to the Trump International Hotel.

But first, on Thursday, January 9, we will join Justice for Muslims Collective and Witness Against Torture at D.C.'s Festival Center to bring the offshore "War on Terror" prison into a larger conversation on resistance within and to the United States' carceral society. Reflecting on Japanese-American incarceration during WWII, mass incarceration, migrant detention, and the prison at Guantánamo Bay, we will explore the criminalization of communities and the state's use of confinement as a tool of social control. The discussion will center the ways in which prisoners and detainees have resisted their captivity, and how advocates have organized against those systems. The speakers are Dr. Maha Hilal, Co-founder of Justice for Muslims Collective; Mike Ishii, Co-chair of Tsuru for Solidarity; Robert Saleem Holbrook, Director of Community Organizing at the Abolitionist Law Center; and Aliya Hussain, Advocacy Program Manager at the Center for Constitutional Rights. The event is free and open to the public. Dinner will be served. Please RSVP. 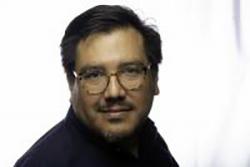 Today, the Center for Constitutional Rights welcomes Ken Montenegro as our first-ever Technology Director. He will lead and develop the organization's technology to advance our mission and align with our long-term strategic goals. He will also lead the organization’s internal technology team in management of day-to-day technology operations, as well as plan and execute new technology projects and initiatives.

"I look forward to leading and learning with the technology team about how technology can be used to appropriately support and advance mission-driven liberation work," he said. "It's an honor to join the Center for Constitutional Rights, and I look forward to applying what I have learned related to technology, the law, and community-based work as another tool in the Center for Constitutional Rights' arsenal."

Ken joins the Center for Constitutional Rights from Asian Americans Advancing Justice in Los Angeles, where he was the Information Technology Director. He is a long-time activist with grassroots communities and movements, in particular around immigration and racist policing. Montenegro is also the current Executive Vice President of the National Lawyers Guild.