News: We’re urging the court to change the ground rules for Guantánamo cases 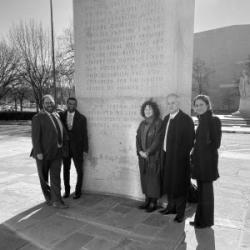 On Wednesday, our attorneys urged a federal appeals court to overturn a lower court ruling against Abdul Razak Ali (aka Saeed Bakhouch), who has been detained at Guantánamo without charge since June 2002, and to rule more broadly that the fundamental protections of the Due Process Clause apply to detainees and limit otherwise limitless detentions there. Mr. Ali had filed a petition for release together with ten other Guantánamo detainees, arguing that their ongoing detention is arbitrary and unlawful, particularly in light of Donald Trump’s stated policy that no one should be released from the prison regardless of the facts of their case. A lower court held that “the [Constitution’s] due process clause does not apply in Guantánamo,” which attorneys say defies Supreme Court precedent. Without due process, detainees face detention for life.

“During the Bush administration, the Supreme Court twice struck down attempts to gut Constitutional protections against arbitrary detention at Guantánamo, but since then the lower courts have made it effectively impossible to win a case in court no matter how weak the government’s evidence is,” said Shayana Kadidal, Senior Managing Attorney of the Guantánamo project at the Center for Constitutional Rights, who argued at the hearing. “[Wednesday’s] hearing asks the court to finally provide detainees the fair process the Supreme Court envisioned ten years ago.” 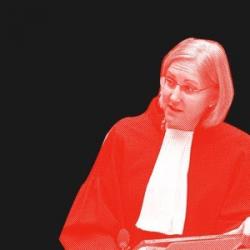 On Tuesday, International Human Rights Day, Advocacy Director Nadia Ben-Youssef and Senior Staff Attorney Katherine Gallagher sat down to talk about Katherine's appearance last week at the historic hearing before the Appeals Chamber of the International Criminal Court, regarding an investigation of crimes against humanity and war crimes committed in Afghanistan and States Parties with a nexus to the armed conflict.

“Over the last many years, first and foremost, we’ve worked to get the individuals, men, women, and children freed, and today there are still 40 men who are detained in Guantánamo. But in addition to freeing individuals, we’ve tried in various capacities to hold U.S. officials accountable for the harms, the serious harms, the international law violations, the constitutional violations, that these individuals were subjected to,” said Katherine during the live broadcast.

The livestream was recorded and can be viewed on our Facebook page. Katherine’s arguments to the ICC in The Hague can also be viewed on the ICC’s YouTube channel.