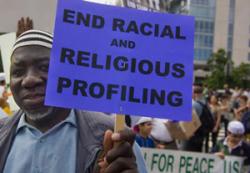 “Hassan v. NYPD proved once and for all that active participation by the citizenry is necessary to hold those in power accountable,” said Farhaj Hassan. “The value of 'equal justice for all' holds America together. That is a value American Muslims will always defend.”

Join us in The Hague via livestream for ICC appeals hearing on U.S. torture accountability

This week, an historic, three-day hearing will be held at the International Criminal Court in The Hague, at which the five-judge Appeals Chamber will hear argument on why the ICC should open an investigation into crimes arising out of the armed conflict in Afghanistan, including U.S. torture.

As part of its long-standing work to seek redress for victims of Bush-era “war on terror” crimes and to hold accountable senior U.S. officials and CIA contractors who designed, implemented, and covered up the “torture program,” Center for Constitutional Rights Senior Staff Attorney Katherine Gallagher represents two victims in the ICC proceedings, Sharqawi Al Hajj and Guled Duran, both of whom remain detained at Guantánamo without charge. She will be arguing that the ICC is the appropriate venue for the U.S. torture program due to the widespread nature of the crimes, the gravity of the harm done, and the unwillingness of the United States to investigate and prosecute the civilian and military leadership responsible for these serious violations.

Donald Trump’s recent pardons — along with his prior appointment of Gina Haspel, who ran a CIA “blacksite,” as CIA Director — only support why it is necessary for the ICC to investigate.

To learn more about this precedent-setting moment, and to read the briefs, including eight recently filed amicus briefs, visit our case page. To watch the hearings live-streamed from the ICC court-room December 4 to 6, visit the ICC page.

In his testimony, Head drew the Committee on Public Safety's attention to the importance of community input into current policies regarding the NYPD's implementation of body-worn cameras.