News: "This attempt to chill our right to free speech should have ended long ago"

"This attempt to chill our right to free speech should have ended long ago." 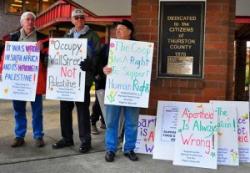 On Tuesday, Center for Constitution Rights Deputy Legal Director Maria LaHood urged a Washington appeals court to uphold a ruling that dismissed a lawsuit against former volunteer board members of the Olympia Food Co-op for the Co-op’s 2010 decision to boycott Israeli goods. The case was originally dismissed as a meritless Strategic Lawsuit Against Public Participation (SLAPP) in 2012, before the Washington Supreme Court struck down the Anti-SLAPP statute. The trial court dismissed the case again last year, finding the Co-op had not suffered any injury following the boycott.

“We’re looking forward to a final resolution of this interminable case,” said defendant Grace Cox, who has been forced to defend against the lawsuit for more than eight years. “This attempt to chill our right to free speech should have ended long ago.”

Deputy Legal Director Maria LaHood said, “This eight-year-old, harassing lawsuit is a textbook attempt to stifle protected advocacy for Palestinian rights. We hope the court will put an end to this abuse of the judicial system once and for all.”

Exhibition: The Pencil Is a Key: Drawings by Incarcerated Artists

Our client Djamel Ameziane is exhibiting select artwork he created while imprisoned at the U.S.-run prison at Guantánamo Bay, Cuba, as part of "The Pencil Is a Key" exhibition at the Drawing Center at 35 Wooster Street in SoHo, New York, running from October 11, 2019 to January 5, 2020.

"The Pencil Is a Key" is an exhibition of historical and contemporary drawings by incarcerated people from all over the globe. Works by artists who were or currently are prisoners will be juxtaposed with drawings by prisoners who became artists while incarcerated. Examples include drawings by political prisoners from the Paris Commune uprising of 1871, artists incarcerated during World War II as noncombatants, and Japanese Americans who were interned by the U.S. government. The exhibit also features artists from Apartheid-era South Africa, Central and South America, and the Middle East.

Learn more on The Drawing Center, including about additional programming that is part of the exhibition, on their website.

In case you missed it: Noura Erakat in conversation with Katherine Franke & Diala Shamas

On Thursday, Center for Constitutional Rights Staff Attorney Diala Shamas and Board Chair Katherine Franke sat down with human rights attorney, professor, activist, and former Center for Constitutional Rights Ella Baker intern Noura Erakat to discuss her new book “Justice for Some.” Grounded in 100 years of history, from the Balfour Declaration in 1917 to the present, and bolstered by careful inspection of legal documents, archives, and conversations with Palestinian negotiators, Erakat offers a compelling critical legal history, laying out how Israel — and the zionist movement before its founding — engaged in legal work to further the settler-colonial project. The outcome, she argues, was never inevitable and current legal frameworks may still be of use to the ultimate goal of Palestinian freedom.

As she, Shamas, and Franke explain, while limited, the law may still lend itself to opportunities for strategic interventions. However, just as a sail needs favorable winds to propel a ship forward, so too does the law require the backing of a political movement to achieve Palestinian emancipation.

If you didn’t have a chance to attend, you can also watch the full talk here.