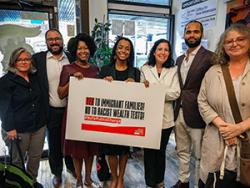 “This rule, inspired by wish lists generated in far-right, nativist think tanks, undermines almost a century of Congressional mandate to prioritize family-based immigration,” said Ghita Schwarz, Senior Staff Attorney at the Center for Constitutional Rights. “It is clearly intended to fulfill the dreams of President Trump, Steven Miller, and Ken Cuccinelli to make immigration benefits available only to ‘people coming from Europe.’”

Our client, Sharqawi Al Hajj, a 45 year-old citizen of Yemen who has been detained without charge for over 17 years, recently stated on a call with his attorney that he wanted to take his own life – a first in our representation of him. Attorneys are taking this with the utmost gravity. His suicidal statements follow a steady and observable deterioration of his physical and mental health that we have been trying to raise the alarm about for two years.

Mr. Al Hajj has been imprisoned at Guantánamo without charge since 2004. Prior to his arrival there, he was tortured for two years in secret CIA detention. He has never received any kind of mental health treatment for the lasting effects of his torture.

We will appear before a judge on Friday, September 6, to press for urgent action on Mr. Al Hajj’s behalf.

Learn more on our website. While you’re there please visit Mr. Al Hajj’s client profile, his case page, and our pending motions.

This month, CREDO Mobile is granting $150,000 or more to three progressive nonprofits – and the Center for Constitutional Rights is one of them! You can cast your vote for us here so we receive these funds – the number of votes that we receive will determine our share.

Voting is free and fast. Please take a minute right now to help us maximize this important funding and deepen our impact – and thank you for standing with us in the fight!