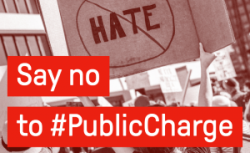 On Tuesday, the Department of Homeland Security announced its long-awaited Public Charge Rule, confirming what we already know: the Trump administration's goal is to close off the immigration system to all but well-off and white immigrants.

The new rule is a malicious attack on immigrant families who may be deemed likely to use social services such as Medicaid at any time in the future, and chills them from obtaining life-saving assistance for fear of losing their chance at status. We know from historical practices that these sorts of rules – penalizing people for struggling when they first arrive in this country – will disproportionately harm communities of color.

It is a cruel, racist, and patently unlawful attempt by the Trump administration to separate families and whiten the country.

We'll see them in court.

On Wednesday, the Labor Department proposed a new rule that would allow government contractors sweeping exemption from nondiscrimination regulations based on their religious beliefs.

The Center for Constitutional Rights condemns this rule, which allows federal contractors to openly discriminate against racial minorities and LGBTQIA+ people under the guise of religion.

We said in a statement:

This proposed rule is the latest effort by the Trump administration and right-wing forces to turn back the clock to the 1950s for LGBTQIA+ people and other minorities. No one should be given a license to discriminate in 2019, let alone while receiving taxpayer dollars.

Discrimination in the Guise of Liberty: Legal Analysis of Trump's Draft Executive Order on "Religious Freedom"

The Center for Constitutional Rights condemns Israel’s decision to bar United States Congress members Ilhan Omar and Rashida Tlaib from traveling to Palestine. This decision once again exposes Israel’s ongoing efforts to exclude Palestinians from their homeland and to repress human rights activism. 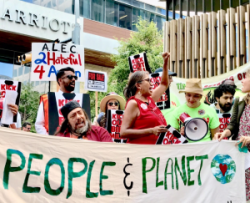 In response to effective advocacy against fossil fuel infrastructure by Indigenous activists and allies at Standing Rock, Louisiana, and elsewhere, ALEC has designed and promoted amendments to critical infrastructure laws. ALEC and its industry allies expanded these laws to include pipelines, raising the severity of punishments for protesting on or near pipelines and other so-called "critical infrastructure" from misdemeanors to felonies.

To coincide with actions in Austin, we and 21 other civil and human rights organizations issued a sign-on letter demanding that state lawmakers cut all ties with ALEC. Read the letter on our website.

Stop by our table at AFROPUNK Festival 2019! 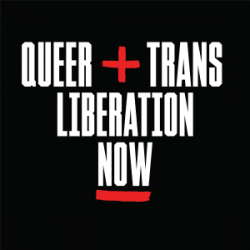 The Center for Constitutional Rights is joining movement partner Strategic Trans Alliance for Radical Reform (STARR) at the AFROPUNK Festival 2019 on Saturday, August 24, and Sunday, August 25, at Commodore Barry Park in Brooklyn.

We'll be giving out our "QUEER + TRANS LIBERATION NOW" T-shirts and raising awareness of the ongoing fight to defend queer and transgender rights on the local and national level. Find us on Activism Row, a space specially designed as a call to action to festival-goers where guests can learn about issues impacting social justice movements.

Come grab a T-shirt and show your support for queer and transgender rights!