Last week, the Center for Constitutional Rights, in collaboration with the American Civil Liberties Union, and Southern Poverty Law Center, filed a lawsuit in U.S. District Court in San Francisco on behalf of non-profit, grassroots organizations challenging the Trump administration's newest asylum restrictions that effectively deny migrants fleeing persecution from the Northern Triangle countries and Africa access to the U.S. asylum process. They filed an accompanying motion seeking an emergency restraining order that would legally invalidate the rule temporarily. A hearing has been set for Wednesday at 9:30 a.m. before Judge Jon S. Tigar in federal court in San Francisco.

Read our press release and learn more on our case page. 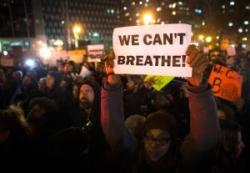 In 2014, Eric Garner’s final words "I can’t breathe" became a rallying cry for police accountability and reform after he was killed by an NYPD officer using a banned chokehold. On Tuesday, the Justice Department announced after nearly five years of deliberation that it would not pursue federal criminal charges against the officer for civil rights violations. We continue to stand in solidarity with Garner and his loved ones and express outrage for the systemic failings of the NYPD, City government, and criminal justice system.

Applications for our paid fall legal internships are open!

The Center for Constitutional Rights is happy to announce that applications have officially opened for our fall legal internship program. The legal internship is a paid position for second- or third-year law students and LLM students to provide legal research and analysis as part of a semester-long internship or externship opportunity.

Interns will spend 10-20 hours per week between September and December 2019 assisting attorneys on projects. This position is also open to students seeking full-time externships.