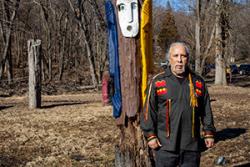 On Friday, a state judge dismissed the Ramapo Hunt & Polo Club's case against the Ramapough Lenape Nation seeking to prohibit them from using their own land for religious practice. The Center for Constitutional Rights sends our congratulations to the legal team for the state case!

The requested injunction and related harassment by the Ramapo Hunt & Polo Club was a blatant attempt to force the Ramapough off sacred land they own and have used for religious practice and cultural assemblies for generations. The court correctly saw through their attempt to use the legal process to target a specific group on the basis of race and religion. We look forward to pursuing further relief through our federal civil rights complaint.

Read more about our federal case on our website. 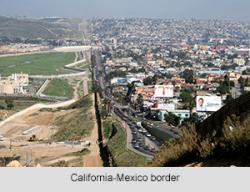 Join us at 10 a.m., Friday, May 10, 2019, in San Diego, CA for oral arguments in Al Otro Lado v. Nielsen. The Center for Constitutional Rights will join with co-counsel from the Southern Poverty Law Center to address the U.S. government’s human rights obligations under federal and international law to protect access to the asylum process. We continue our support for refugee rights in representing Al Otro Lado and over a dozen asylum seekers who were denied the ability to seek safe haven and refuge.

Note: Please arrive at least 30 minutes early to get through security. ID may be required.

Al Otro Lado has been a vocal critic of the U.S. Customs and Border Protection's (CBP) inhumane and unlawful practices on the U.S.–Mexico border. As a crucial part of their work requires that their directors travel into Mexico to serve migrant communities there, they have experienced firsthand the cruel effects of CBP's actions toward asylum seekers.

"Now, more than ever, the protection of human rights at the U.S.-Mexico border is a critical mission as the U.S. government seeks to obliterate the right to seek asylum, and each day brings new reports of the multitude of ways that U.S. Customs and Border Protection officers violate the rights of asylum seekers at U.S. ports of entry and of those in their custody," stated Nicole Ramos, director of Al Otro Lado's Border Rights Project.

You can view the full timeline of events at the Center for Constitutional Rights case page. 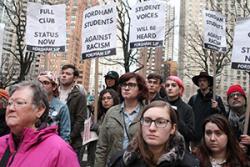 Please join Fordham students at 9:30 a.m., May 8, at New York County Supreme Court as they continue to seek the right to organize a Students for Justice in Palestine (SJP) club on campus.

Note: Please arrive early to ensure you can pass through the security screening and enter the courtroom on time – the courtroom fills up quickly.

Lawyers from the Center for Constitutional Rights and Palestine Legal, together with cooperating counsel Alan Levine, will argue that the court should grant our motion to add a new petitioner in the case, Fordham sophomore Veer Shetty. In the two years since the lawsuit was first filed, three of the four original petitioners have graduated, and the fourth student is graduating in May.

It has been 16 months since the New York County Supreme Court heard the Fordham students' urgent request for an order permitting them to form an SJP on campus, as well as Fordham's motion to dismiss the case, and the students are still awaiting the court's decisions. The ongoing delay is effectively a denial of justice for the students.

You can view the full timeline of events, select media coverage, and letters of support at the Center for Constitutional Rights case page or Palestine Legal's case page.

This Friday in NYC! Freedom Flicks: The Silence of others @ Film Forum 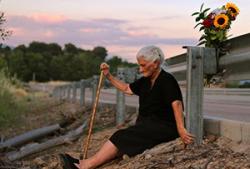 What if you were tortured for your political beliefs and one day you woke up to find that the man responsible was now your neighbor? This is the reality for victims who, following General Franco's 40-year dictatorship in Spain, saw their perpetrators enjoying immunity for the vicious crimes they committed against the people of Spain.

This Friday, May 10, the Center for Constitutional Rights is partnering with the Film Forum to bring to you The Silence of Others, a powerful story of victims and survivors who, to this day, are seeking justice.

A cautionary tale about fascism and the dangers of forgetting the past, Emmy-winning filmmakers Almudena Carracedo and Robert Bahar follow a movement that begins in a kitchen and evolves into a groundbreaking international lawsuit, bringing together hundreds of victims and survivors who have broken Spain's "pact of silence." Filmed over six years, The Silence of Others raises profound questions about how societies grapple with legacies of state violence and what to do with perpetrators of crimes against humanity in their midst.

Stick around after the 7 p.m. screening for a talk back with filmmaker Almudena Carracedo and Center for Constitutional Rights Senior Staff Attorney Katherine Gallagher, with short introductory remarks from special guest Pablo de Grieff, former UN Special Rapporteur on the promotion of truth, justice, reparation, and guarantees of non-recurrence.

Get tickets on the Film Forum website. Use the code JUSTICE for discounted tickets.