Abu Ghraib: Recognizing 15 years since the release of images of Iraqi torture victims

April 28 marks fifteen years since media outlets published scores of graphic images depicting egregious human rights abuses at the Abu Ghraib prison in Iraq. The images reveal the extent to which military police, interrogators, and interpreters were willing to employ cruel, degrading unlawful interrogation methods against Iraqi detainees. These photos outraged the country – and the world – and led to military investigations that brought to light "sadistic, blatant and wanton criminal abuses" by U.S. soldiers and government contractors.

The Center for Constitutional Rights, with a small team of private lawyers, brought a series of civil lawsuits against the two contractors, L-3 Services Inc. (formerly Titan Corporation and now Engility) and CACI International Inc. Our cases, on behalf of hundreds of Iraqi plaintiffs, demand accountability and redress for acts of torture and other serious violations of international law arising out of the U.S. invasion of Iraq. We settled one case on behalf of 71 former detainees, Al Quraishi v Nakhla and L-3 Services, in 2012, and lost another, Saleh v Titan, in a 2-1 decision, with now-Supreme Court Justice Brett Kavanaugh in the majority and Judge Merrick Garland writing a forceful dissent.

Fifteen years later, we continue to litigate the last of these cases on behalf of three Iraqi civilians held at the Abu Ghraib "hard site", Al Shimari, et al. v. CACI Premier Technology. This month, mere days ahead of the anniversary of the revelation of Abu Ghraib photographs, it seemed that our clients would finally get their day in court. Instead, on the eve of trial, CACI filed another appeal (the fifth in this case), which led to the suspension of our trial date. The case is moving forward and briefing before the Fourth Circuit Court of Appeals is underway.

The Center for Constitutional Rights and plaintiffs are undeterred and continue to forge ahead towards trial, for reasons best stated by Plaintiff Salah Al Ejaili in a recent interview with the Independent: "If the court rules in our favour it would be a clear message for any company or officials that torture will not be tolerated...I am not doing this for a grudge, I am doing it to get justice. And not just for me, for everyone."

Survivors deserve to have their stories heard and to see CACI held accountable for its role in torture and other human rights violations at Abu Ghraib prison in Iraq. Justice requires truth and accountability. We will continue to fight.

Today, instead of looking back at the dehumanizing photos out of Abu Ghraib, please visit photographer Chris Bartlett's site, to see the photos he took of some of our plaintiffs.

Want to know more about Abu Ghraib? Have a listen to episode 13 of our podcast The Activist Files where Legal Director Baher Azmy and Senior Staff Attorney Katherine Gallagher discuss our case against private military contractor CACI Premier Technology, Inc., for its role in torture and other abuse at Abu Ghraib.

Recap: How we took on the Muslim Ban with Samantha Bee 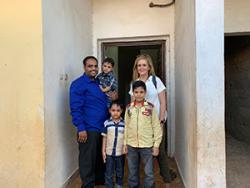 Earlier this year, Samantha Bee, the host of Full Frontal with Samantha Bee, traveled to Djibouti with the Center for Constitutional Rights Staff Attorney Diala Shamas to meet with seven Yemeni-American families who were stuck in limbo because their visas were denied as a result of the Trump administration's Muslim Ban.

The episode that resulted was a six-minute unmasking of the discriminatory policies that currently plague the visa application process. In the episode, Bee concludes that the only consistently successful recourse for families with frozen applications is increased media attention. She ends the program with a call to action to the media urging that they do their part to reunite the Yemeni-American families who have been ensnared by Trump's Muslim Ban.

Since the airing of the episode, three of the seven families interviewed have seen their visas granted. Each of the families had been waiting for months and in some cases years to receive their visas. The remaining four families still await approval from the State Department.

As stated by Diala, "Whether or not you're reunited with your family shouldn't depend on your ability to make it on prime time television." She adds the fact that three families were granted visas "underscores the arbitrariness of the process, and the Department of State's ability to process a waiver swiftly and safely if they put their minds to it."

While we celebrate the positive outcome for the three families, we must also remember that thousands of Yemeni-Americans are still exposed to abusive immigration practices and Muslim profiling under the administration's Muslim Ban. As of April 2019, only six percent of 37,000 visa applications were approved for waivers.

Read more about the effort to reunite Yemeni-American families on our resource page or this reporting by the Washington Post.

Freedom Flicks is the Center for Constitutional Rights' long-running film series, harnessing the power of film to educate, activate, and build community. Our Spring Season is in full swing, with two May screenings in the queue: The Feeling of Being Watched on May 1 and The Silence of Others on May 10.

All of our programs include screenings of cutting-edge, socially-engaged films accompanied by a discussion with the storytellers, lawyers, and activists on the frontlines of these struggles.

This Wednesday, the Center for Constitutional Rights, in partnership with the Brooklyn Academy of Music (BAM), will present The Feeling of Being Watched, directed by journalist and filmmaker Assia Boundaoui. Join us after the screening for a discussion with Omar Farah, Senior Staff Attorney, Center for Constitutional Rights and filmmaker Assia Boundaoui, moderated by Darnell Moore. Tickets go fast, so make sure to get yours! Tickets can be purchased at BAM's website. Use discount code BAMCCR19 for BAM member ticket price.

In the Arab-American neighborhood outside of Chicago where Assia Boundaoui grew up, most of her neighbors believed they were under government surveillance for over a decade. In this stunning documentary, Boundaoui, a journalist and filmmaker, conducts a comprehensive investigation to corroborate their worst fears. The Feeling of Being Watched is an attempt to shine a light on a secret FBI operation to surveil one American community. Unearthing tens of thousands of pages of government documents, Boundaoui connects the dots to one of the largest counter-terrorism investigations conducted in the U.S. before 9/11. In the process, she confronts long-hidden truths about the FBI's relationship to her own community, grappling with the new knowledge of a lifetime of surveillance on herself and her family.

Next, the Center for Constitutional Rights will be partnering with the Film Forumto bring to you The Silence of Others, a powerful story of victims and survivors who, to this day, demand justice for violence committed during Spain's 40-year-long dictatorship under General Franco.

A cautionary tale about fascism and the dangers of forgetting the past, Emmy-winning filmmakers Almudena Carracedo and Robert Bahar follow a movement that begins in a kitchen and evolves into a groundbreaking international lawsuit, bringing together hundreds of victims and survivors who have broken Spain's "pact of silence." Filmed over six years, The Silence of Others raises profound questions about how societies grapple with legacies of state violence and what to do with perpetrators of crimes against humanity in their midst.

Stick around after the 7:00 pm screening for a talk back with filmmaker Almudena Carracedo and Center for Constitutional Rights Senior Staff Attorney Katherine Gallagher.

Get tickets on the Film Forum website. Use code JUSTICE for discounted tickets.