"The Women of Cancer Alley" - A Freedom Flicks screening

On April 18, the Center for Constitutional Rights and Louisiana Bucket Brigade will be hosting a short-film screening and discussion featuring a group of women community leaders from the area along on the Mississippi River in Louisiana known as “Cancer Alley”.

This event elevates a legacy of community resistance to the discriminatory and environmentally destructive presence of the oil, gas, and chemical industry in Louisiana. Today’s fight in Cancer Alley is led primarily by Black women living in communities inundated with chemical plants, tank farms, and refineries. This work is on the front line of the national and global movement to combat climate change and environmental racism.

Details and registration information on our events page.

Join us at the Al Shimari v. CACI trial April 23 in Alexandria, VA 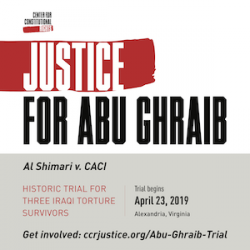 For the last 11 years, our clients, Suhail Al Shimari, Asa’ad al Zubae, and Salah Al Ejaili, have been waiting for their day in court to tell a U.S. jury of the cruel and humiliating treatment they endured while detained at Abu Ghraib prison in Iraq. They seek to hold accountable CACI Premier Technology, which they allege participated in a conspiracy to torture at the notorious prison in 2003-04. The Center for Constitutional Rights filed Al Shimari v. CACI in 2008 on their behalf and that long awaited day is nearly here: the case is set to go to trial on April 23 in Alexandria, Virginia.

CACI Premier Technology, a private military contractor that provided interrogation services at the Abu Ghraib prison, has consistently tried to avoid this day: it has filed 17 motions to dismiss the case, resulting in four trips to the Fourth Circuit Court of Appeals.

CACI is still trying: after Judge Brinkema found the United States could not be immune from liability for torture and war crimes and then denied CACI’s claim of “derivative immunity”, it filed yet another notice of appeal this week.

We are undeterred and continue to move forward toward trial, for reasons best stated by our client Salah Al Ejaili in a recent interview with the Independent: “If the court rules in our favor it would be a clear message for any company or officials that torture will not be tolerated.... I am not doing this for a grudge, I am doing it to get justice. And not just for me, for everyone.”

Join the Center for Constitutional Rights and our co-counsel for this historic trial, and show your support for torture survivors, human rights, and corporate accountability.

Visit our events page for details about the trial. While you’re there, also check out our factsheet on accountability for torture by private military contractors.

ICYMI: Airbnb coverage in the news

In November, Airbnb released a statement announcing a new policy that would remove listings by Israeli settlers in “disputed regions” of the West Bank, excluding Jerusalem. The decision was immediately challenged by dual Israeli-U.S. citizens who are settlers and whose listings are to be removed. These individuals sued Airbnb in a court in Delaware, alleging discrimination under the Fair Housing Act.

On March 18, the Center for Constitutional Rights filed a motion to intervene that case on behalf of two Palestinian individuals, a village, and a municipality. They seek to bring counterclaims against the settlers for war crimes, crimes against humanity, trespass, unjust enrichment, and under the Fair Housing Act for the settlers’ own discriminatory postings. Palestinians from the West Bank are barred from accessing their land, while the settlers are profiting off of it.

Upon filing, CCR released four one-minute videos of our clients, explaining in their own words why they intervened and the lived experience of Palestinians affected by Israel’s illegal occupation and settlement enterprise.

The story was also picked up by a number of news outlets. Among the highlights: