News: In Djibouti to keep up the fight against the Muslim Ban

In Djibouti to keep up the fight against the Muslim Ban 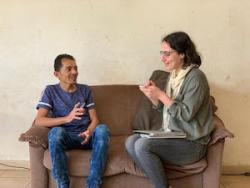 Our Staff Attorney Diala Shamas spent last week in Djibouti meeting with Yemeni families who are stranded there while they wait for visas. Their visa process has been either delayed or denied due to Trump's Muslim Ban. We were last in Djibouti exactly one year ago, with a team of Yale Law School students doing research for the report, Window Dressing the Muslim Ban.

Several of the families Diala met with on this trip have been in Djibouti since the last meeting in 2018. They're still awaiting visas, unable to return to Yemen because of the ongoing conflict and unable to join their families in the U.S. You can find out more about the Center for Constitutional Rights' litigation on behalf of Yemeni-American families stranded in Djibouti: Alobahy v. Trump.

Netroots Nation 2019: take a look at our panels and vote!

In July, we will be in Philadelphia for Netroots Nation, the largest annual conference for progressives, and we’re excited to have proposed a few ideas for trainings and panels. If you like them, please take a moment to vote!

In "Separate corporation and State!" Fighting ALEC's control of state governments is a fight against racism too, we will explore American Legislative Exchange Council’s (ALEC) capture of state governments to weaponize the law against communities of color by bringing corporate representatives and politicians together to secretly draft laws, then lobby to pass them into law. Read more and vote.

In Freedom of information! FOIA as a grassroots advocacy tool, together with one of our partners, Detention Watch Network, we will go through the basic steps for filing and litigating a Freedom of Information Act (FOIA) request, and show how information obtained through FOIA can shape creative and powerful public education and advocacy campaigns. Read more and vote.

In The power of persona: shape your story into a powerful digital presence, we will give social justice activists ideas on how their personal story is connected to the causes they care about, directions to help them navigate the online universe, and tools to understand the different audiences and pick the media with the highest potential. Read more and vote.

Our Executive Director Vince Warren plans to speak at Progressive foreign policy in the 2020 elections & beyond, a panel that will seek to articulate a foreign policy vision that revolves around three core commitments of a progressive framework: principled anti-interventionism, ending endless war, and solidarity with global anti-racist and anti-authoritarian movements. Read more and vote.

Vince will also contribute to Racial justice has no borders: embedding Palestinian rights in the 2020 agenda, a panel with the goal to amplify voices of activists calling on institutions of power -- from the mainstream media to Congress -- to support freedom, justice, and equality for all people, including the Palestinian people. Read more and vote.

Our Senior Staff Attorney Pardiss Kebriaei will participate in No separate justice: challenging Islamophobia in policing, prosecution and immigration policy, a conversation on the ways in which Muslim communities, often rendered invisible in the public discourse about criminal justice, policing, and immigration, are harmed by these systems. Read more and vote.

Our Bertha Justice Fellow Aya Saed will be part of Movement or movements? The perils of Islamophobia on the left to discuss institutionalized and structural Islamophobia in the War on Terror and specifically the narratives and policies that those on the left have supported such as U.S. warfare and surveillance. Read more and vote.

Next week in NYC: join us at Refest! 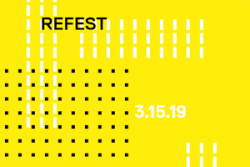 We are proud to join the Magnum Foundation and the NYU Interactive Telecommunications Program as a collaborating organization on CultureHub's Refest 2019. CultureHub's annual festival brings artists, activists, and technologists together to envision our role in re-shaping the future. Through exhibitions, performances, and conversations, Refest 2019 explores how we create, resist, and redefine gender within an evolving technological landscape.

Visit Refest 2019's page for a full line-up of participants and RSVP on Eventbrite. The festival will take place over the course of three days, beginning at 7 p.m. each evening.