The Center for Constitutional Rights is headed to trial in an historic lawsuit about torture at the infamous “hard site” at Abu Ghraib prison in Iraq. Al Shimari v. CACI et al. is a case on behalf of three survivors of torture at the prison—Suhail Al Shimari, Asa’ad Al Zuba’e, and Salah Al-Ejaili—against private military contractor CACI Premier Technology, Inc., for the company's role in a conspiracy to torture detainees. CACI provided interrogation services at the prison. The case was filed in 2008, and CACI has sought to dismiss it 16 times (with a 17th motion just filed!), causing multiple trips to the Fourth Circuit Court of Appeals.

Last Wednesday, we urged the court to reject CACI’s latest attempts to dismiss the case, including its motion for summary judgment. Without even hearing argument on some of the motions, Judge Leonie Brinkema said that the case of these three men should be heard by a jury: "you should expect if you don't settle this case, it's going to go to trial." Enough is enough—our clients deserve their day in court to tell the jury what they endured, and an opportunity to hold to account a private corporation that has continued to reap millions in profits despite its role in a conspiracy to torture. This trial, scheduled to begin in Alexandria, Virginia on April 23, 2019, will be the first case on behalf of post-9/11 torture survivors to go to trial. Stay tuned in the coming weeks as we bring you our clients’ stories, background on the case, and updates on the trial. This spring, we intend to finally bring an end to 15 years of impunity for torture at Abu Ghraib. 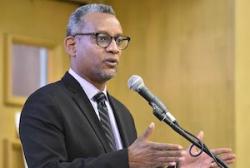 Center for Constitutional Rights Executive Director Vince Warren recently gave the keynote address at “Reimagining the Criminal Justice System,” a gathering of criminal justice scholars, practitioners, and activists at UCLA School of Law. The day-long symposium explored how to transform a criminal justice system that overwhelmingly, and harshly, affects communities of color. In his speech, Vince asked the audience to imagine far into the future—beyond the campaign cycle, beyond the next generation, beyond even the generation after that—and ask what Black people then will be able to thank those working now to change the criminal justice system for. His answer: unbridled joy. “I see Black people that are at ease, I see Black people that are full of wonder, I see Black people that are unencumbered…unafraid…full of joy.” The task of those of us fighting now is to finally make enough change that the history of oppression and violence that are, as Vince said invoking James Baldwin “features—not bugs” of the Black experience, no longer impede that joy.

Listeners of the Center for Constitutional Rights podcast, The Activist Files, recently heard our latest episode, “Science Fiction as Social Justice Strategy,” with Walidah Imarisha and Gabriel Teodros discussing the importance of imagination as a social justice strategy. Vince himself was deeply inspired by a talk that Walidah gave here at the Center for Constitutional Rights, in which she challenged all of us in social justice to set as a clear social justice goal what seems impossible today. His keynote, urging us to envision unbridled joy for future Black generations, is an inspiring example of this imaginative strategy.

We have a new landing page for the Center for Constitutional Rights podcast, The Activist Files. The new page makes it easier to search, listen, read transcripts, and share the podcast. The new page lists all past episodes of The Activist Files; allows for more photos, videos, links, and transcripts, which will begin with the March episode (to be released on March 14); and makes the content, including interviewers and interviewees, searchable. Check it out! If you haven’t downloaded and subscribed, what are you waiting for? Find us on Spotify and iTunes.