The Center for Constitutional Rights meets with Congress

Last week, Center for Constitutional Rights Executive Director Vince Warren and Advocacy Director Nadia Ben-Youssef briefed progressive members of Congress on a range our issues, from Guantánamo to Palestine and the U.S.'s complicity in international human rights abuses. The advocacy delegation, organized together with our partners Adalah – The Legal Center for Arab Minority Rights in Israel, Adalah Justice Project, and the US Campaign for Palestinian Rights, sought to take advantage of a new political moment following an election that added more progressive voices to the U.S. Congress. Nadia and Vince introduced a framework of human and civil rights as the drivers of domestic and foreign policy, and made clear that movements for social justice are looking for bold progressive leadership from legislators and political coherence across issue areas and geographies. Equality, freedom, and justice are the three progressive values that should undergird both domestic and foreign policy, Vince and Nadia told Congress members—a message that was welcomed by this new, progressive group. The delegation ended with an event at the Thurgood Marshall Civil Rights Center at Howard University School of Law, hosted by Center for Constitutional Rights board member Professor Justin Hansford. The event, "Building a Global Justice Movement," considered this shift in progressive discourse, the legacy of transnational solidarity, and what it means to be a movement lawyer today.

A federal judge has dismissed a lawsuit against our client, Dr. Steven Salaita, the American Studies Association (ASA), and others. In 2013, the ASA adopted a resolution to endorse the boycott of Israeli academic institutions to honor the call by Palestinian civil society for Boycott, Divestment, and Sanctions (BDS) for Palestinian freedom. Dr. Salaita joined the board of the ASA two years after the resolution was adopted. Four ASA members sued in 2016, and added Dr. Salaita as a defendant last year. Dr. Salaita has long been an outspoken advocate of Palestinian rights and a supporter of BDS. In 2014, the Center for Constitutional Rights represented him after he was fired from a tenured position at the University of Illinois at Urbana-Champaign for his tweets criticizing Israel’s 2014 assault on Gaza, which a federal court found implicated every central concern of the First Amendment. Similarly, in the ASA case dismissed against him last week, Dr. Salaita was clearly targeted because of his criticism of Israel. The court dismissed the entire case against Dr. Salaita, the American Studies Association, and all defendants.

Last Thursday, our Advocacy Program Manager Nahal Zamani testified before the New York City Council's Public Safety Committee during an oversight hearing about the functioning of the Civilian Complaint Review Board (CCRB). The CCRB is an independent agency that exists to hear complaints brought against the NYPD. You can read our written testimony here, and you can watch Nahal's testimony before the committee here.

A year later, still no ruling in Fordham Students for Justice in Palestine cause 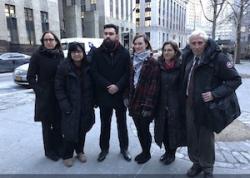 Frontlines of Justice readers may remember a case we filed almost two years ago on behalf of students at Fordham University after Fordham overruled the student government's approval of a Students for Justice in Palestine (SJP) club. More than a year ago, the court heard oral arguments over Fordham's attempt to dismiss the case, as well as on an injunction the students requested to order Fordham to allow them to organize the SJP—or they would have graduated by the time the case concluded. Now, that very situation is coming to pass. More than a year after oral argument, we are still awaiting a ruling. Three of the students in the case have graduated, and another will graduate this spring. On Friday, along with our partners at Palestine Legal, we filed a motion to add a sophomore student, Veer Shetty, to the case, lest Fordham be able to continue to violate students' right to organize simply by running out the clock. The fact is, Fordham could do the right thing at any time. It needs no court ruling in order to stop violating students' rights and allow them to form an SJP club at Fordham. Until then, we will continue to litigate the issue.