News: “Remain in Mexico” policy is a virtual wall and will lead to deaths

In response to the announcement that the Trump administration will force asylum seekers to remain in Mexico while their applications are being processed, we think that, like all of the Trump administration's immigration policies, "Remain in Mexico" is inhumane and unlawful. Rates of violence in U.S.-Mexico border towns are often as high or higher than they are in the countries asylum seekers are fleeing. People will die. They will die on both sides of the border, whether in Mexico because of organized crime, en route because of increased trafficking, or because they will be forced to cross between ports of entry, on the U.S. side from exposure to the elements.

Yet another wall this policy creates is the wall between asylum seekers and their attorneys. Forcing asylum seekers to wait across the border during cases that often take years to resolve institutionalizes lack of access to counsel and access to due process.

This is a virtual wall, a work-around for the fact that Trump's proposed physical wall at the border is widely seen for what it is—racist, xenophobic, unnecessary, ineffective, expensive, and cruel—and widely rejected by the American people. 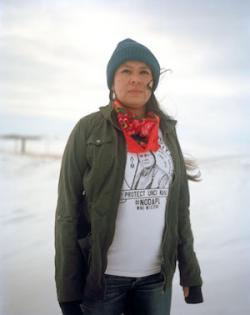 Last week, together with EarthRights International, we urged a federal judge to dismiss a racketeering lawsuit filed by Energy Transfer against Krystal Two Bulls, an Oglala Lakota and Northern Cheyenne U.S. Army veteran and environmental and Indigenous rights activist, for her participation in efforts to stop the Dakota Access Pipeline. We believe the lawsuit is frivolous and aimed at intimidating pipeline critics into silence.

Ms. Two Bulls has been sued for exercising her constitutionally protected rights while participating in protests against the pipeline. Energy Transfer has filed lawsuits against numerous protesters, activists, and organizations since 2017. The court has thrown out several of the claims, but the company continues to broaden the case by naming more defendants.

Last week, together with Palestine Legal, we filed a friend-of-the-court brief in the Ninth Circuit Court of Appeals in support of an ACLU lawsuit seeking to strike down an Arizona law prohibiting state contractors from boycotting Israel. Any entity that contracts with state or local government in Arizona has to submit a written certification that it is not currently boycotting Israel and that it will not do so for the duration of the contract. Not only do we believe this law violates the First Amendment, but we think of it as part of a broader effort to suppress speech in support of Palestinian human rights.

"Political boycotts—peacefully and collectively advocating for change by withdrawing support from unjust systems—have helped dismantle inequality and oppression throughout history, from civil rights boycotts in the U.S. to boycotts against South African apartheid," said our Deputy Legal Director Maria LaHood. "Boycotts against Israel are no exception—which is exactly why they are under widespread attack by those who are trying to silence growing demands for Palestinian freedom."

Palestine Legal Senior Staff Attorney Radhika Sainath said, "Politicians have made it crystal clear that the goal of these laws is to stop the growing movement for Palestinian rights. But the state can't punish people who disagree with Israel's discriminatory practices. If they're allowed to punish boycotts for Palestinian rights, no political boycotts will be safe."

This Wednesday in NYC: Join us at 'Fighting for Justice'

What does it mean to be intersectional in the social justice space? If you’re in NYC on Jan. 30, join us, Joo-Hyun Kang, Kayhan Irani, and Carlton E. Williams, as we discuss why cross-movement collaboration essential to keeping up the fight for justice.