Wonderful news for our clients and their families from Yemen 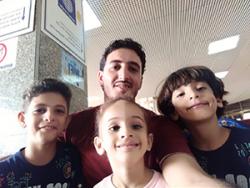 Yemeni-Americans who for more than a year had been prevented from joining their families in the United States because of Donald Trump's Muslim Ban arrived in New York City. Last month, U.S.-citizen family members of Sawsan Saleh, who arrived Friday with her three U.S.-citizen children, and Amal Alobahy, who arrived on Saturday, filed a federal lawsuit over the State Department's refusal to issue their visas, which had already been approved prior to the Muslim Ban. Shortly after the lawsuit was filed by the Center for Constitutional Rights and co-counsel, Sawsan and Amal received their visas.

"While we are relieved for our clients' sake, it is tragic that they had to resort to litigation to get visas they were entitled to all along," said Center for Constitutional Rights Staff Attorney Diala Shamas. "Our clients' experience belies any purported security rationale for the Ban. Until Congress repeals Donald Trump's Muslim Ban, many more families will continue to be needlessly separated." 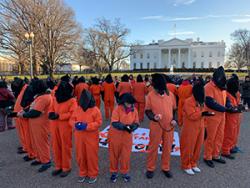 Friday was the 17th anniversary of the arrival of the first men at the Guantánamo prison. Forty remain stranded there. First, our attorney Pardiss Kebriaei spoke at a Congressional briefing, which can be viewed here. Later that day, a coalition of human rights groups – including the Center for Constitutional Rights, Amnesty International USA, Witness Against Torture, the National Religious Campaign Against Torture, and the Justice for Muslims Coalition – held a rally across from the White House to demand the closure of the detention camp, end indefinite detention of the detainees, and condemn the fear-mongering, cruelty, racism, and xenophobia that has defined Trump's presidency. A video of the rally is on Facebook Live here.

Frankly, we’re not surprised. On Friday morning, the court-appointed monitor in our landmark stop-and-frisk case Floyd v. City of New York filed a report with the court that proves the NYPD and de Blasio administration's 'Mission Accomplished' narrative around stop-and-frisk is not based in fact. The large numbers of unreported and unconstitutional stops and continued failure of supervisors to effectively monitor their subordinate officers' stop activity—all confirmed by the NYPD's own data—show that the department continues to engage in conduct that undermines public trust and harms New Yorkers. The NYPD has a long way to go to bring its stop-and-frisk practices into compliance with the Constitution and the federal monitorship to an end. You can read the monitor's report here.

The Center for Constitutional Rights joined LGBTQI advocates in urging a federal appeals court to uphold a lower court ruling requiring the Florida Department of Corrections to provide medical care to a transgender woman in a Florida prison. Eleven LGBTQI advocacy and legal services organizations filed an amicus brief in the case of Reiyn Keohane, a transgender woman incarcerated in a Miami prison who was denied medically necessary care. The brief argues that denying her the medically necessary treatment was cruel and unusual punishment and explained that being able to live in accord with one's gender identity is medically necessary for transgender people, as recognized by many other courts and by the medical community. The brief elevates the voices and experiences of transgender men like Ky Peterson and transgender women like Ashley Diamond, Jessica Hicklin, and Zahara Green, all of whom suffered because they were denied the ability to socially transition in prison. The brief also notes that the Federal Bureau of Prisons and at least 20 state Departments of Corrections' policies recognize social transition as medically necessary treatment for gender dysphoria.

Center for Constitutional Rights Attorney Chinyere Ezie said, "The Center for Constitutional Rights has a long history of advocacy with the LGBTQI community, and we remain committed to fighting against LGBTQI persecution in all of its forms. We are proud to elevate the voices and stories of the transgender community behind bars, and will fight alongside them until state officials stop the cruel and usual practice of denying them medically necessary care."

A state superior court in New Jersey categorically rejected certain fines levied against the Ramapough Lenape Nation for placing a sacred prayer circle on their own land. The ruling cut in half the amount of fines issued by the township of Mahwah, NJ for ostensible zoning violations. The court upheld fines of approximately $5000 against the Ramapough for erecting a tent on their land over a 102-day period, without seeking a permit, which was then removed.

The Center for Constitutional Rights represents the Ramapough in a related federal lawsuit against the township of Mahwah, NJ, and the Ramapo Hunt and Polo Club for racial and religious discrimination. The law firm of Weil, Gotshal & Manges LLP serves as pro bono co-counsel in the case. The Ramapough are represented in the appeal of the state case in which this ruling occurred by members of the New York City chapter of the National Lawyers Guild.

The Center for Constitutional Rights welcomed the superior court's refusal to uphold fines against the Ramapough for placing a sacred prayer circle, constructed from natural materials, on their own land. The Ramapough have a fundamental right to gather to worship on their land, as they have for centuries, and we look forward to defending this right in federal court.