In St. Louis and surrounding Missouri counties, police officers have been allowed to issue a "wanted," the equivalent of a statewide arrest warrant into an electronic database that designates an individual for immediate summary arrest for up to 24 hours at a time, without ever seeking a judicial determination of probable cause. But last week, the new County Prosecutor Wesley Bell deemed the "wanteds" practice unconstitutional: "We want to make sure we are not violating people's rights, and there are requirements established when it comes to warrants to make sure we are protecting people's rights to due process," he said.

Despite the judge’s ruling in Furlow v. Belmar and his denial of the constitutional claims of the lawsuit, Bell said that eliminating the "wanteds" system is one of his priorities. He would like officers to seek warrants instead that include protections for the accused because warrants require approval from prosecutors and judges, not just police officers alone.

This week in D.C.: JOIN US to #CloseGitmo 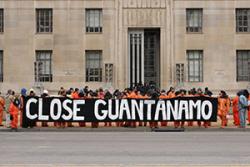 This January marks 17 years the prison at Guantánamo Bay has been opened. Forty men remain imprisoned without charge or fair trial, and with no end in sight. This week in Washington, D.C. we will mark this shameful anniversary, call for an end to indefinite detention at Guantánamo, and make connections between the prison’s legacy and the racist and xenophobic policies perpetuated by the Trump administration.

The State of Muslim Rights in the U.S. War on Terror

At 6 p.m., Thursday, Jan. 10, together with Justice for Muslims Collective and Witness Against Torture, we will talk about the impacts of the War on Terror on Muslims, both in its current manifestations under the Trump administration and its systemic nature, while addressing the role of institutionalized Islamophobia as part and parcel of the post 9/11 national security apparatus. Details and RSVP.

At 2:30 p.m., Friday, Jan. 11, we will meet at the north side of the White House with Amnesty International, Justice for Muslims Collective, Witness Against Torture, and other allies to rally together to close Guantánamo and call for a stop to the cruelty, fear, racism, Islamophobia, and lies, perpetuated by this administration. Take a look at the details of the event.