We have exciting news in our ongoing efforts to provide legal support to activists and communities fighting against the Bayou Bridge Pipeline (BBP) in Louisiana, which is the southern end of the network of pipelines that includes the controversial Dakota Access Pipeline (DAPL). As Frontlines of Justice readers know, the Center for Constitutional Rights is involved in several legal cases as part of these efforts, including the eminent domain lawsuit that recently went to trial and several public records cases. On Thursday, in our case seeking the release of records from the St. Charles Parish Sheriff’s Office in Louisiana relating to travel and activities of personnel sent to assist the law enforcement response to protests at Standing Rock in North Dakota, the court of appeals reversed a lower court decision and ordered the sheriff to produce receipts related to his employees’ travel to North Dakota, as well as to search cameras for video footage taken during their time there. In 2016, St. Charles Parish Sheriff Greg Champagne traveled to North Dakota as head of the National Sheriffs’ Association to observe the law enforcement response to protests against the DAPL, and later dispatched more of his officers to travel there (to the tune of nearly $36,000) to support the production of a pro-law enforcement video series called “Know the Truth.” The records the court has ordered released will help clarify and confirm what Louisiana law enforcement personnel were doing in North Dakota with regard to significant matters of public concern. 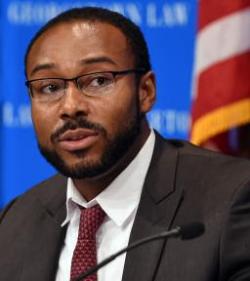 Hansford is a leading scholar and activist in the areas of critical race theory, human rights, and law and social movements. He is a co-author of the forthcoming Seventh Edition of “Race, Racism and American Law,” the celebrated legal textbook that was the first casebook published specifically for teaching race-related law courses. His interdisciplinary scholarship has appeared in academic journals at various universities, including Harvard, Georgetown, Fordham, and the University of California at Hastings.

In the wake of the killing of Michael Brown in Ferguson, Missouri, Hansford worked to empower the Ferguson community through community-based legal advocacy. He co-authored the Ferguson to Geneva human rights shadow report and accompanied the Ferguson protesters and Mike Brown’s family to Geneva, Switzerland, to testify at the United Nations. He has served as a policy advisor for proposed post-Ferguson reforms at the local, state, and federal level, testifying before the Ferguson Commission, the Missouri Advisory Committee to the United States Civil Rights Commission, the President’s Task Force on 21st Century Policing, and the Inter-American Commission on Human Rights. 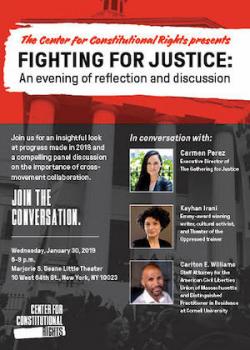 On January 30, from 6:00 to 9:00 PM, join us in New York City for Fighting for Justice, an evening of reflection and discussion on the struggle for justice in 2018. From the fight at the southern border and family separation, to the opposition to oil pipelines and the harassment-by-lawsuit of environmental activists, to racial justice struggles, and much else in between, the Center for Constitutional Rights was at the forefront of the fight for justice in 2018. At this event, we will take an insightful look at progress made in 2018 and host a compelling panel discussion. Our guest panelists include executive director of Gathering for Justice and National Women’s March co-chair Carmen Perez, Distinguished Practitioner in Residence at Cornell University Carlton E. Williams, and Emmy-award winning writer, performer and Theater of the Oppressed trainer Kayhan Irani. Find more information about the event, including speaker bios, here. We hope to see you there!