After the Bayou Bridge Pipeline LLC (BBP) was sued for beginning construction of a crude oil pipeline on land that is not theirs, BBP brought an action against the landowners, our clients, to formally take their land so that it could continue construction. BBP claims that it should be allowed as a private company to expropriate this land because the pipeline is for a 'public and necessary' purpose. A hearing will take place on November 16 in St. Martin Parish, Louisiana, where CCR, Loyola University's Bill Quigley, and the Atchafalaya Basinkeeper will ask the court to dismiss BBP's lawsuit. Allowing a private company such as BBP to seize land based solely on its own assertion that its private oil pipeline serves a public and necessary purpose would violate property and due process rights of landowners that are safeguarded by the United States and Louisiana Constitutions. BBP's lawsuit should, but does not, include all of the landowners who are affected by its land grab, and the lawsuit is premature as BBP has not obtained the environmental and construction permits necessary to build the pipeline. If those permits are denied, then BBP may not even be able to use the land they have taken from landowners. If this case is not dismissed, then the full trial is set for November 27, so stay tuned! Read more about our work fighting the Bayou Bridge Pipeline and the land expropriation.

Yesterday, our partners at About Face interrupted a ceremony that celebrated Veterans Day by honoring former president George W. Bush for supposedly working to "secure the blessings of liberty to people around the world." CCR stands in solidarity with About Face and other war-impacted communities and condemns this whitewashing of history. See the video here.

Tune in to episode 8 of The Activist Files: South Africa's shack dwellers movement "organizing the unorganized"

What does it mean to live under constant life threats for speaking up against a deeply racist, discriminatory, and violent state system? S'bu Zikode, co-founding member and former president of Abahlali baseMjondolo, the shack dwellers' movement in South Africa, talks about it in "Under the Shadow of Death," the eighth episode of The Activist Files.

S'bu gives an overview of what happened during the apartheid system in South Africa and what the current situation in the country looks like, between aggressive, discriminatory policing and people fighting for their land and their lives. He spoke about the shack dwellers' movement foundation and philosophy, from what he calls "organizing the unorganized," to the art of "the living politics."

Listen to The Activist Files.

The Center for Constitutional Rights, the American Civil Liberties Union, and the Southern Poverty Law Center have filed a federal lawsuit challenging the asylum ban proclamation signed Friday by Donald Trump. The lawsuit currently charges the administration with violating the Immigration and Nationality Act as well as the Administrative Procedure Act. The case, East Bay Sanctuary Covenant v. Trump, was filed in federal court in San Francisco. It was brought on behalf of East Bay Sanctuary Covenant, Al Otro Lado, Innovation Law Lab, and the Central American Resource Center in Los Angeles.

Baher Azmy, legal director of the Center for Constitutional Rights, said, "Ever since the horrors of World War II, the world's nations have committed to giving asylum seekers the opportunity to seek safe haven. The Trump administration cannot defy this most elementary humanitarian principle, in violation of U.S. and international law, with a flip of a presidential pen."

CCR on the move: Art and Migration, Berlin 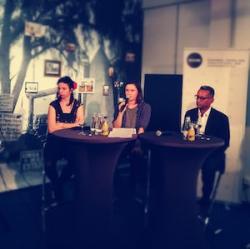 The opening was accompanied by a discussion between Laura, Vince, and Vera Wriedt of ECCHR on artistic and legal interventions as intertwined means to oppose the violence at the external borders of the USA and Europe. The photographs from the series "La Border Curios" by Laura Fiorio show multi-faceted aspects of the U.S.-Mexican border regime and its exclusionary logics. Seeking to intervene against injustice with creative legal strategies, the Center for Constitutional Rights is challenging the practices of forced family separation and denial of access to asylum at the U.S.-Mexican border. At CCR, we believe that if you have an activist, a lawyer, and a storyteller, you can change the world.