A Salvadoran mother whose son was taken from her by U.S. immigration officials at the southern U.S. border seven months ago continues to fight for her right to be with her child. She filed a lawsuit Thursday in the federal District Court for the District of Columbia alleging that the Department of Homeland Security (DHS) has violated the U.S. Constitution by refusing to allow her and her son to reunite.

The mother, referred to as "Ms. Q" in the case, was erroneously denied reunification in July in the wake of the Trump administration's disastrous "zero-tolerance" policy of prosecuting asylum seekers and taking their children. Last week, a Texas immigration judge refused to acknowledge that the gang-related threats and severe gender violence Ms. Q fled El Salvador to escape warranted asylum protection, but also effectively concluded she is not a danger to the community.

While Ms. Q appeals the asylum denial, her wellbeing and that of her son continue to deteriorate as they remain separated. Ms. Q and her son are represented in Ms. Q. v. U.S. Customs and Immigration Enforcement pro bono by attorneys at Gibson, Dunn & Crutcher LLP; the National Immigrant Justice Center (NIJC); and the Center for Constitutional Rights.

"This mother and son fled the risk of torture and death in their home country, only to be met with a U.S. policy of torture — the separation of parents from infant children," said Center for Constitutional Rights’ Legal Director Baher Azmy. "The Constitution prohibits the administration's cruel practice of ripping families apart in pursuit of its discriminatory policy of excluding refugees who are fleeing persecution at home. This cruelty is still happening today, with shattering psychological and emotional trauma to families." 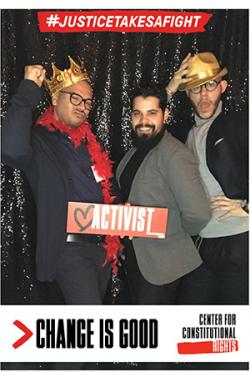 A huge thank you again to those who joined the Center for Constitutional Rights Oct. 18 as we launched our new identity. We sent an e-mail Thursday with a video and pictures from the photo booth. In case you missed it, check out the video and pictures. Don’t forget to follow and tag the Center for Constitutional Rights on social media. Instagram.  Twitter. Facebook. LinkedIn.