The Center for Constitutional Rights celebrated an incredible victory last week after a federal judge ordered the immediate reunification of a Honduran immigrant father, Mr. C., and his two-year-old son, after they had been held in separate New York detention facilities and barred from communicating for five months.  The federal judge called separating a father from his child "the most cruel of all cruelties."

The victory came just 11 days after CCR filed a federal lawsuit challenging Mr. C. and his son's detention and separation pursuant to the Trump administration's cruel "Zero Tolerance" policy targeting non-citizen families. Mr. C. was released on bond on Wednesday, October 10, and the following day applied to reclaim custody of his son, who remained in a detention facility in the Bronx run by the Office of Refugee Resettlement (ORR). When the government put up a number of administrative barriers to prevent Mr. C. from getting his son out of detention, CCR filed an emergency motion to force the government to release the two-year-old immediately, and headed to court.

Outside the courthouse after the ruling, Mr. C. said, "In this time I've felt desperation at not being able to see my son, but today, with the judge's decision, I already feel the pain going away. I'll be so happy to reunite with my son later this afternoon."

Change is Good: The Center for Constitutional Rights' new look and messaging 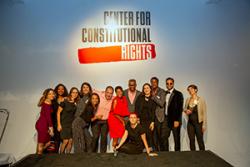 Last Thursday, the Center for Constitutional Rights hosted the annual CCR Celebrates Changemakers and the Change is Good identity reveal party. This year's Changemakers honorees included: Dolores Canales, co-founder of California Families to Abolish Solitary Confinement and a former Soros Justice Fellow; Sara Jayyousi, a 22-year-old writer, storyteller-activist who uses the art of spoken word to challenge to Communication Management Units, prison units designed to isolate certain prisoners from the rest of the Bureau of Prisons population; and Miriam Buhl and the law firm Weil, Gotshal & Manges, co-counsel in our successful fight against solitary confinement at California's Pelican Bay prison. After a lively discussion facilitated by Executive Director Vince Warren, Board Chair Katherine Franke announced that we are committing to working in the South in a larger capacity. Stay tuned!

The evening continued at Change is Good, to reveal the Center for Constitutional Rights' new identity. We worked the last 10 months updating our logo, tagline, mission and vision statements, and key messages, which we were excited to unveil.

Thank you to all who took the time to be with us last week, and for those who were unable to attend, learn more about our new messaging on our "Who We Are" page, and follow us on Instagram at @ccrjustice!

We recently submitted a new filing in our case challenging the Trump administration's policy and practice of turning back asylum seekers at ports of entry along the U.S.-Mexico border, Al Otro Lado v. Kelly. The filing directly links high-level Trump administration officials to an official "Turnback Policy," ordering U.S. Customs and Border Protection (CBP) officials to restrict the number of asylum seekers who can access the asylum process at ports of entry. The Turnback Policy compounds other longstanding border-wide tactics CBP has implemented to prevent migrants from applying for asylum in the U.S., including lies, intimidation, coercion, verbal abuse, physical force, outright denials of access, unreasonable delay, and threats including family separation.

Read more about the case here.