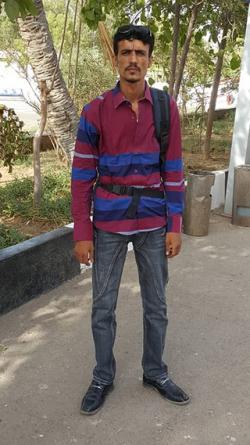 Last week, after 17 years, Ali Ahmad, a Yemeni man CCR profiled in our report on how the Muslim Ban affects Yemeni-American families, was granted a coveted waiver and able to reunite with his family in the United States. We highlighted his case in the report because it provided important context to the Muslim Ban, illustrative of a broader pattern of Department of State and consular delays, misconduct and scrutiny of Yemeni and others' visa petitions, well before the Muslim Ban was ever even mentioned.

Mr. Ahmad's father, a U.S. citizen, first submitted a petition for his son's visa in 2002. After years of confronting obstacles with the U.S. Embassy, which lost his DNA tests and documents multiple times, Ali was told in a September 2017 interview that his visa had been approved. Then, the Supreme Court allowed Trump's Muslim Ban to go into effect, throwing his long-awaited plans into jeopardy. The week before last, he was granted an elusive waiver and prepared to join his family in Dearborn, Michigan.

Ahmad commented to a local news station upon his arrival at the Detroit airport: "I cannot explain how happy I am since I got into the U.S. My happiness will be completed after I see all the Yemeni-American and Yemeni families who got stuck in other countries."

What does the visa journey of many Yemeni-Americans look like? Check out our report, Window Dressing the Muslim Ban, to read their stories.

Last Wednesday, four protestors were arrested by the New Orleans Police Department for trying to enter the national American Legislative Exchange Council (ALEC) conference to call on Governor John Bel Edwards and all Louisiana lawmakers to end their association with the anti-democratic right-wing policy group. Our Louisiana partners—350 New Orleans, New Orleans Palestinian Solidarity Committee, and L'eau Est La Vie—were calling attention to the fact that ALEC-designed legislation is being developed behind closed doors and pushed into law, threatening the lives and livelihoods of ordinary Louisianans, especially people of color. The police arrested four protestors of color who stood outside on the sidewalk, while inside the ALEC meeting, white protestors interfered with the meeting proceedings, but were not arrested.

Meg Logue of 350 New Orleans and the No Bayou Bridge coalition said, "What happened today was exemplary of ALEC's vision for our country—one where corporations write the laws, free speech and dissent are suppressed and people of color pay the highest price."

The protest was part of a week of action to #AbolishALEC put on by 350 New Orleans, New Orleans Palestinian Solidarity Committee, and L'eau Est La Vie to highlight the impact of ALEC on human rights and the environment. Follow and amplify #AbolishALEC on social media to support their critical work.

A federal judge has criticized Energy Transfer Partners (ETP), the corporation behind the Dakota Access Pipeline, for pursuing a lawsuit against Earth First!. Last year, ETP filed a sprawling case that claimed the environmental movement Earth First! funded a "violent terrorist presence" and "criminal enterprise" at Standing Rock, with $500,000 and proceeds from drug sales on the site, and conspired with Greenpeace and other environmental groups to deceive the public about the environmental risks of pipelines. The court noted that ETP’s "voluminous filings of historical, irrelevant web postings" made it clear that the complaint "did not, at the time of filing, have evidentiary support." The court also rejected ETP's attempt to collect discovery against the Earth First! Journal, a non-party in the suit.

Grayson Flory, editor the Earth First! Journal commented, "Energy Transfer Partners is trying to distract us from their continued destruction of communities and the environment by concocting an elaborate story alleging that the powerful, Indigenous-led resistance to the Dakota Access Pipeline was a criminal conspiracy spearheaded by mostly white NGOs and environmental movements. Instead of taking the bait, we should all be joining groups like the L'eau est la Vie Camp in Louisiana that is actively blocking an ETP pipeline project, as well as supporting the political prisoners currently serving time for resisting ETP's dangerous pipelines, including Red Fawn Fallis, Michael 'Little Feather' Giron, and Ellen Gerhart."

On Wednesday, CCR and the NAACP Legal Defense and Educational Fund (LDF) filed suit against the NYPD for its failure to provide an accurate and complete response to two separate requests for information on its gang policing tactics. The NYPD maintains a database that classifies thousands of New Yorkers–99% of whom are people of color–as members of local street gangs or crews. The NYPD relies on this racially discriminatory system to conduct military-style gang takedowns.

"The NYPD's so- called 'Criminal Group Database' and gang policing practices are a black box that, like stop-and-frisk before them, have subjected thousands of young people of color in New York City over the past several years to police surveillance, harassment, and worse" said Darius Charney, CCR Senior Staff Attorney. "It is therefore critical that the NYPD provide the public with enough information about these programs to determine whether they comply with the law."