On Wednesday, a federal court in Detroit heard oral argument in CCR’s case challenging Michigan’s controversial Emergency Manager Law. Public Act 436 allows the state to replace locally-elected mayors, city and town councils, and school boards in so-called “financially distressed” municipalities and school districts with unelected emergency managers. CCR and our allies at the Sugar Law Center for Economic and Social Justice and the National Lawyers Guild (NLG) are arguing that the law violates the Equal Protection Clause of the Fourteenth Amendment, which prohibits racial discrimination. More than fifty percent of Michigan’s Black residents have been placed under emergency manager rule at some point in the last 5 years, compared to only two percent of the state’s white population. This has deprived the majority of Black voters in Michigan of their right to democratically-elected government. Moreover, there have been devastating material effects: emergency managers were directly responsible for poisoning the city of Flint’s water supply, after switching the source to the contaminated Flint River. CCR, Sugar Law, and the NLG are working to have the law declared unconstitutional and struck down.

CCR and the Immigrant Defense Project (IDP) have launched ICEwatch, an interactive project documenting operations by Immigration and Customs Enforcement (ICE) from 2013 until today. It documents nearly 700 raids, the vast majority of which were conducted after Donald Trump’s inauguration. ICEwatch documents these raids on a U.S. map, and allows viewers to sort them by the location of the raid, the tactics used, and date range. It also provides narratives about the raids. It is a comprehensive and disturbing look at ICE’s abusive immigration practices. As CCR Senior Staff Attorney Ghita Schwarz said, “ICEwatch  shines  a  light  on  ICE's  program  of  terrorizing  communities  through  raids,  ruses,  home invasions, courthouse arrests, and other forms of coercion. By demonstrating the wide reach of ICE's destructive and unlawful tactics, we hope to educate and empower immigrants and allies.” Along with the interactive map, CCR and IDP issued a report, ICEwatch: ICE Raids Tactics Map – A Brief Summary of ICE Raids Trends to Accompany [ICEwatch], further explaining ICE tactics and summarizing the raid narratives. Check out—and share!—the interactive map and report, and this Intercept article about the project. 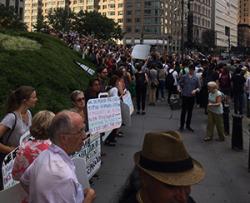 On Thursday, CCR co-sponsored the Deportee Suitcase Solidarity March in New York City, along with the New Sanctuary Coalition, Immigrant Defense Project, Make the Road New York, and more than a dozen other organizations. The march highlighted one aspect of the Immigration and Customs Enforcement (ICE) deportation machine: the single, 25-lb. suitcase loved ones are permitted to pack and drop off before people are deported. Participants in the march were asked to imagine packing that suitcase for someone they love. It would contain what they could take with them to start over. “What objects, what pieces of clothing, what photos, what books, what letters what would you pack?” the organizers ask in their call to action, noting that “Members of our communities, our neighbors, have to make these choices every day.”Attendees brought with them everything from wedding rings to insulin to pack for their loved ones. It was a powerful event, with protesters on all sides of the Federal Building at 26 Federal Plaza. One of the speakers was New Sanctuary Executive Director Ravi Ragbir, who continues to be under threat of deportation himself, and who was honored earlier this year at CCR’s Spring Reception.