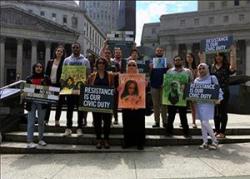 With a conservative Supreme Court majority, it was no surprise the justices upheld Trump's Muslim Ban. But there was a silver lining: In a vote against the racist policy, Justice Breyer cited on page 63-4 a report CCR and the Rule of Law Clinic at Yale Law School authored that highlights the impact of the visa and waiver process on Yemeni Americans.

"Finally, in a pending case in the Eastern District of New York, a consular official has filed a sworn affidavit asserting that he and other officials do not, in fact, have discretion to grant waivers. According to the affidavit, consular officers "were not allowed to exercise that discretion" and "the waiver [process] is merely 'window dressing'"… Another report similarly indicates that the U.S. Embassy in Djibouti, which processes visa applications for citizens of Yemen, received instructions to grant waivers "only in rare cases of imminent danger," with one consular officer reportedly telling an applicant that "'[e]ven for infants, we would need to see some evidence of a congenital heart defect or another medical issue of that degree of difficulty that . . . would likely lead to the child’s developmental harm or death.'" Center for Constitutional Rights and the Rule of Law Clinic, Yale Law School, Window Dressing the Muslim Ban: Reports of Waivers and Mass Denials from Yemeni-American Families Stuck in Limbo (2018).

And in response to Tuesday's Supreme Court ruling on Trump's Muslim Ban, we issued the following statement:

Today's decision locates Trump's Muslim ban within a normal range of presidential discretion to control immigration. But this is not normal. The Muslim Ban is a historic act of discrimination, and a fully-enacted policy implementing Trump's consistent and bigoted expression of hatred toward Muslims. The Court's shameful acceptance of an immigration policy – that is separate and unequal – will stand not only as a naked betrayal of the principles of Freedom of Religion this country claims to embrace, but also as another of one of its historic judicial mistakes akin to Korematsu and Plessy v. Ferguson.

Following the Supreme Court's decision to uphold the Muslim Ban, the Center for Constitutional Rights and Muslim Advocates filed a Freedom of Information Act (FOIA) lawsuit demanding documents from federal agencies related to the purported waiver scheme that has become the only avenue for relief for dozens of Iranian, Syrian, and Yemeni families seeking entry to the U.S.

In January, the groups filed a FOIA request seeking information on the administration's process of granting case-by-case waivers from the Muslim Ban. Despite the administration's claim that the waiver process would be "robust," the organizations have documented reports of mass denials to people who should, according to the administration's guidelines, be eligible for a waiver, casting doubt on whether a meaningful process exists at all, or whether it is, in fact, left up to consular discretion as alleged.

The request was sent to the U.S. Department of Homeland Security, the Department of State, Customs and Border Protection, and the U.S. Citizenship and Immigration Services (USCIS). All the agencies summarily ignored the request. The lawsuit is demanding that the government comply with its legal obligations and provide the public with much-needed clarity about the waiver process.

"Families will continue to seek ways to pry open the gates that have been slammed shut by the Supreme Court," said CCR's Diala Shamas. "Until this administration reverses its course, the many individuals that we met with who are stranded in places like Djibouti and elsewhere deserve information on how to navigate this administration's Machiavellian waiver process." 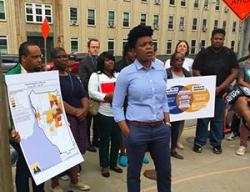 Civil rights groups filed a class action lawsuit Thursday against the City of Buffalo over unconstitutional and racially discriminatory vehicle checkpoints and traffic ticketing practices. According to Black Love Resists in the Rust v. City of Buffalo, the Buffalo Police Department deployed unconstitutional vehicle checkpoints in Black and Latinx neighborhoods, resulting in massive overticketing of these communities—and significant revenue for the City budget.

"For more than five years, the BPD systematically targeted low-income Black and Latinx neighborhoods and residents for aggressive and punitive traffic enforcement," said Claudia Wilner, senior attorney at the National Center for Law and Economic Justice. "Our analysis shows that 91.4 percent of checkpoints occurred in communities of color, and race was a driving factor in the locations of these checkpoints."

Attorneys say the City used checkpoints and traffic violations to harvest revenue. Income from traffic violations increased a staggering 92 percent after the checkpoints were implemented. The number of tickets issued and the corresponding revenue to the City increased dramatically again in 2015 after New York State authorized Buffalo to keep all of the revenue from traffic tickets as a form of "fiscal relief" to taxpayers. Moreover, officers often issued multiple tickets for a single violation. One class member received four tickets for having tinted windows—one ticket for each window.

The Activist Files on Spotify 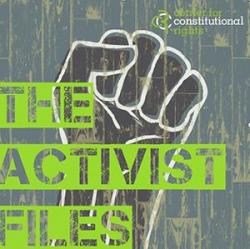 We recently celebrated The Activist Files official launch on iTunes. Now, we are celebrating that our monthly podcast is also available on Spotify.

The Activist Files is a podcast by the Center for Constitutional Rights where we feature the stories of people on the front lines fighting for justice, including activists, lawyers, and artists. We interview movement partners, our clients, and people using storytelling to create change, and look to highlight lesser known aspects of the work. Listen to our latest episode here, or subscribe through your podcast app, or directly on iTunes or Spotify! Get involved by rating and reviewing each episode.