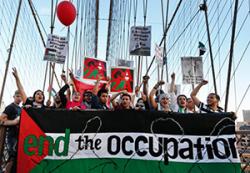 This Tuesday will mark 70 years of the Nakba, or the catastrophe, commemorating the forced displacement of Palestinians by the establishment of the state of Israel in 1948. It has also been 50 years of Israel's occupation of the West Bank, including Jerusalem, and 11 years of its punitive closure of Gaza, whose residents have been shot and killed in nonviolent protests in recent weeks.

Over the past six weeks, Israeli military forces have used excessive force to suppress the Great Return March in Gaza, targeting and killing people participating in demonstrations. Just today, the Israeli military has shot and killed at least 30 Palestinians and 1000 injured. Since the start of mass protests, the Israeli military has fired live ammunition from snipers, used plastic coated steel bullets, and launched tear gas grenades from drones. Human rights organizations have documented that over 40 Palestinians have been killed while participating in these demonstrations, including five children, two journalists, one person on crutches and two people with disabilities. During the same period, 3,979 have been injured, including 732 children, 131 women, 35 paramedics, and 37 journalists—of them 2,186 were hit by live fire.

The U.S. must no longer support Israel's gross human rights violations, and must halt further assistance to Israel in accordance with U.S. law and international law.. Today, we also condemn Trump’s move of the U.S. Embassy from Tel Aviv to Jerusalem, in violation of international law.  United States support and encouragement of Israel’s occupation and systemic violations must end now.

Haspel nomination goes before the Senate 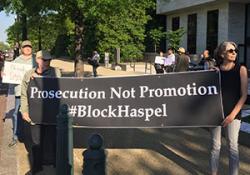 Last week, the Senate held confirmation hearings for Gina Haspel to head the CIA, and the Center for Constitutional Rights continued to vigorously oppose her nomination along with a growing chorus of critics. Gina Haspel should be prosecuted, not promoted to the helm of the CIA.

When pressed by the Senate, Haspel could not answer one of the most basic questions in the torture debate: whether she believes torture – some of its most overt kinds, like waterboarding – is immoral. Instead, she simply repeated the refrain, the "CIA follows the law." But let us be clear. The question was about right and wrong. And the law does not condone torture. It prohibits torture universally, no matter the circumstances. The "law" the CIA relied upon during the Bush administration was a deliberate distortion of that fundamental, universal principle.

If what we know about Gina Haspel isn't troubling enough, consider what we don't know, and the fact that decisions about the information we do and do not have access to are being made by none other than the nominee herself. As Acting Director of the CIA, Haspel is the gatekeeper of the CIA's information about her record.

Haspel's answers last week show she's unwilling or unable to acknowledge the magnitude of the crimes that were committed in the CIA torture program. Her confirmation would send an even more unambiguous signal that the United States thinks torture is permissible. That signal would be broadcast loud and clear: domestically, to intelligence agencies, police, and prison wardens, and internationally, to dictators, authoritarian regimes, and those opposed to human rights.

Our clients were subjected to the CIA torture program, men like Sharqawi Al Hajj, Guled Hassan Duran, and Majid Khan. This should not be a partisan issue. Every self-respecting senator should stand up and do what is right: vote against the confirmation of Gina Haspel to head the CIA.

The second episode of our podcast, The Activist Files, is out! Listen to CCR Senior Staff Attorney Pam Spees talk with Anne Rolfes, Founding Director of the Louisiana Bucket Brigade, and Pastor Harry Joseph of the Mount Triumph Baptist Church and the Humanitarian Enterprise of Loving People (HELP) in St. James, Louisiana. Rolfes and Joseph are helping to lead the fight to stop the Bayou Bridge Pipeline, the southern tail of the Dakota Access Pipeline (DAPL). As Anne introduces it in the episode, the Bayou Bridge Pipeline is Energy Transfer Partners' "latest bad idea." CCR has filed public records requests and litigation in support of their efforts. Give The Activist Files a listen!