CCR goes back to its roots 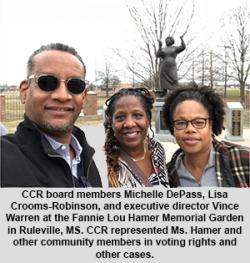 Last week, CCR held our Board meeting in Jackson, Mississippi. CCR was founded in 1966 by attorneys who represented civil rights movements in the South, and Mississippi is the programmatic birthplace of CCR, where our southern office operated for over 20 years. The visit was led by CCR board members Nsombi Lambright, who is based in Jackson, and Lumumba Akinwole-Bandele, who has deep connections there. CCR programmatic staff, management team members, and board members heard from former CCR staff in the South and people who worked with them. They visited historic sites, including the town where Emmett Till was tragically murdered, toured the Emmett Till Museum and the Fannie Lou Hamer Museum, and visited Greenville, MS, where the CCR southern office was located. CCR staff and board members met with people continuing the fight for racial justice today, building partnerships with groups and individuals organizing on the ground so that we can continue to carry forward the work supporting grassroots movements that our founders began over 50 years ago.

Teaching Trump's lawyers how to litigate

CCR has formally filed for sanctions against a law firm representing the part-owners of the Dakota Access Pipeline, which also happens to be Donald Trump's go-to law firm. The sanctions motion claims that counsel for Energy Transfer Partners (ETP) and Energy Transfer Equity (ETE) misused the legal system by suing "Earth First!" for federal racketeering, despite knowing that "Earth First!" is a philosophy or an idea, not an entity that can be sued. They then attempted to serve "Earth First!" by mailing the complaint to the address of an environmental publication, Earth First! Journal, which is not named in the lawsuit. Last month, CCR served Kasowitz Benson Torres and co-counsel Robert B. Stock of the Vogel Law Firm with the motion, allowing the firms 21 days to withdraw the improperly served papers and remove Earth First! as a defendant from its complaint. Kasowitz Benson Torres has not done so, leading CCR to ask the court to impose sanctions on it and the Vogel firm (which withdrew from the case without explanation on the 21st day, but also failed to correct its actions).

Meanwhile, in addition to the sanctions we asked the court to impose (requiring them to pay attorneys' fees and forcing them to explain to their law firm colleagues that you can't sue an idea), we've come up with a list of other actions that would also help these lawyers to remember basic civil procedure—such as sourcing their drinking water from one of the dozens of communities that suffer the effects of consuming water polluted with chemicals from oil spills. Check out the full list here.

Continuing the fight against discriminatory policing

Last week, CCR joined with other legal and community groups, including the Legal Aid Society and the NAACP Legal Defense Fund, to support family members of New Yorkers impacted by "gang" policing. On Monday, they launched a "FOIL Yourself" campaign, a reference to New York's Freedom of Information Law, to demand basic transparency and accountability in how the New York City Police Department (NYPD) classifies New Yorkers as gang affiliates. In particular, they seek information on NYPD gang policing tactics and the criteria used for labeling someone a gang affiliate. Currently, the NYPD maintains secret databases of people—including children at least as young as 12 years old—with alleged gang ties without notifying people that they have been labeled as such or offering them an opportunity to challenge the designation. In general, the criteria seem to rely on where an individual lives, the people with whom they associate, and their appearance. Also on Monday, a letter signed by over 30 legal and community groups was delivered to Council Member and Committee on Public Safety Chairman Donovan Richards calling on Richards to hold public hearings examining gang policing tactics in New York City. If the NYPD will not disclose information about its gang policing, the groups are prepared to obtain that information through the Freedom of Information Law. CCR's participation in the FOIL campaign and letter to Richards is part of our longstanding work challenging racially discriminatory policing.

Charity Navigator has featured CCR in its Black History Month list of highly-rated charities. Help us continue the fight for racial justice—we can’t do this work without you. Donate today!