A recent piece in Al Jazeera reveals recently released FBI & DHS internal documents in our FOIA case with Color of Change, showing how the agencies are surveilling the Movement for Black Lives on the grounds of their unchallenged view that #BlackLivesMatter protests give rise to violence.

CCR Senior Staff Attorney Omar Farah said: “The problem with surveillance - and particularly the historic and current surveillance of black-led movements for social change - is that the surveillance itself is what does all the work. . . Surveillance is what chills people from mobilizing and organizing.”

The DHS documents also demonstrate the stark contrast with the agency’s approach to white supremacist groups, which they paint largely as “lawfully protesting.”

As Color of Change’s Brandi Collins commented, “The subtext here is stunning. It tells us who the government is training to view as threats and the rightful targets of ongoing surveillance and which groups will be offered protection.”

In case you missed it, check out the short film Fault Lines produced on the case: Confidential: Surveilling Black Lives.

Last week, the North Carolina Commission of Inquiry on Torture held an open hearing on North Carolina’s role in the U.S. torture program – including the extraordinary rendition and torture of our client Sharqawi Al Hajj, who has been detained in Guantanamo since 2004. Sharqawi was held in black sites for over two years prior to his transfer to Guantanamo. The NC Commission highlights the complicity of Aero Contractors, located in Johnson County, NC, which operated a plane involved in transferring detainees from site to site. The commission is a critical public-led initiative seeking to bring to bear some accountability for the torture program. Watch the video of the hearing here.

CCR has long worked for accountability for the U.S. torture program, from representing multiple torture survivors, to seeking to hold senior Bush administration officials accountable under the principle of universal jurisdiction in other countries.

The artwork the Trump administration doesn’t want you to see 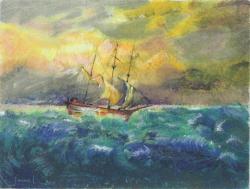 A painting by Djamel Ameziane, on display at the "Ode to the Sea" exhibit

People detained in Guantanamo have made and released art for many years without incident, and a number of pieces of detainee artwork are part of the ongoing exhibit, Ode to the Sea, at the John Jay College of Criminal Justice in NYC. CCR clients Djamel Ameziane and Ghaleb Al-Bihani both have works on display.

The exhibit, which has been up since October has not only drawn widespread media attention, but the attention of the U.S. military, which has declared that it will no longer allow any artwork to be released from the prison. According to media reports, the government even contemplated burning it.

This new policy has been met with public criticism, including a petition launched by the exhibit’s curators. On Tuesday, the National Coalition Against Censorship, PEN America, and others issued a statement in response to the new government policy: “The only purpose it appears to serve is to block the American public’s access to detainees’ artistic expression and stifle the public’s full participation in a national conversation about the US government’s policies in Guantanamo. Recognizing that the detainees at Guantanamo Bay, most of whom remain held without charge, possess human imagination may inspire an uncomfortable empathy, but Americans have a right to fully examine their government’s policies and their effects.”

While the government has clarified that it will archive the art, and not burn it, it still stands that art will not be allowed to leave Guantanamo.

For Djamel and Ghaleb, and so many other prisoners, art has been a way to live at and through Guantanamo, and also to connect to the outside world. They would send their artwork to families through the Red Cross and to their lawyers.

“For many years we, Guantanamo prisoners, were pictured by many US government officials, as monsters…the worst of the worst, and I am sure many Americans believed that. Displaying the art work is a way to show people that we are people who have feelings, who are creative, that we are human beings, we are normal people and not monsters,” Djamel wrote explaining why he wanted to show his artwork.

"[The destruction of this art] is a senseless policy intended only to further strip the prisoners of their humanity and what little agency they have, and it is alarming,” CCR Advocacy Program Manager Aliya Hussain told VICE.