World Day Against the Death Penalty

Tomorrow, October 10, is the 15th World Day Against the Death Penalty, which aims to raise awareness about the reasons why people living in poverty are at a greater risk of being sentenced to death and executed. 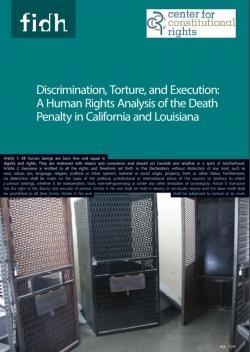 The death penalty is used discriminatorily, often against the most vulnerable people and should be abolished. The application of the death penalty is inextricably linked to poverty. Social and economic inequalities affect access to justice for those who are sentenced to death for a number of reasons, including that defendants may lack resources (social and economic but also political power) to defend themselves and will in some cases be discriminated against because of their social status.

World Coalition Against the Death Penalty, which is organizing tomorrow's efforts, asked allies to sign a letter in support of ending the death penalty. CCR went a step further: we drafted a letter to Trump and are asking for your signatures. We plan to send the letter to him this fall.

More than 200 organizations, including CCR, are calling for the New York City Council to pass the Right to Know Act into law to help end police abuses. The Act promotes police accountability in New Yorkers' most common interactions with the NYPD to prevent abuses and unconstitutional searches that continue in communities across the city.

Communities for United Police Reform are organizing a Right to Know Rally on Wednesday, October 11, from 12-3 p.m. Join us as we demand more police accountability.

The Right To Know Act is a legislative package to protect the civil and human rights of New Yorkers in everyday encounters with the NYPD by improving transparency and accountability. It consists of two bills (Int. 182B & Int. 541A) that have majority support in the NYC Council and are awaiting a vote. The bills make the NYPD explain why they are stopping someone, identify themselves to the public, document consent to a search, and provide information to those they stop and search about how they can file a complaint about police conduct.

After a three-month hiatus, the Supreme Court of the United States resumed session last week. CCR is watching a couple of cases that will affect our civil and human rights.

On Wednesday, October 11, the Supreme Court Court will hear argument in Jesner v. Arab Bank ostensibly on the question of whether the Alien Tort Statute (ATS) applies to corporations. CCR and the International Federation for Human Rights submitted an amicus curiae brief to the Court in Jesner in defense of as a critical legal tool to hold corporations accountable for egregious human rights violations. There is a risk, in this case, that the Court could shift its focus from this straightforward question to another, as it did five years ago when it heard argument in Kiobel v. Royal Dutch Petroleum on the question of corporate liability and subsequently ordered briefing – and ruled instead – on the extraterritorial application of the ATS. Because the framing of the case presented to the Court in Jesner limits the ATS to a narrow on terrorism, it threatens to undermine the unique avenue the ATS provides for accessing accountability and justice for survivors of grave human rights abuses.

In 1979, CCR revived the ATS, then a little-known law from 1789 in the landmark  case, Filártiga v Peña-Irala, and since then the ATS has had a storied legacy of protecting human rights. Even with a win on the question of corporate liability, Jesner could, paradoxically, topple that legacy.

Since 2009, appropriations bills passed by Congress have required the funding of 34,000 immigration detention beds per day. DHS and ICE have interpreted this funding provision as a requirement that those beds be filled at all times, through the use of local jails and correctional facilities as well as private, for-profit correctional corporations with enormous lobbying power, resulting in a quota for detainees that has no parallel or precedent in the U.S. criminal justice system. In November 2013, DWN and CCR filed a Freedom of Information Act (FOIA) request with the DHS and ICE for information and documents pertaining to the so-called "detention bed quota," also known as the "detention bed mandate." When the agencies failed to comply, we filed suit against them. 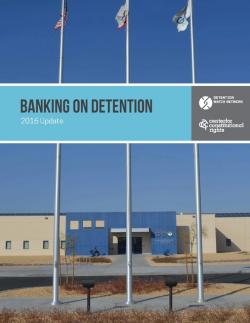 One of these private prison corporations, GEO Group, has petitioned the Supreme Court for review of the case. The Court could decide as soon as this morning whether to grant or deny this petition.

The public has a right to understand the motives of government officials and agencies regarding a policy that devastates families and immigrant communities. CCR and DWN hope to obtain information that gives the public a better understanding of the detention bed quota, the decision-making surrounding the quota, and its impact on detention policy and detention contracting decisions. This information will enable the public, advocates, and policymakers to engage in an important ongoing policy debate. To learn more, check out "Banking on Detention: Local Lockup Quotas and the Immigrant Dragnet," a report released by DWN and CCR.

Solidarity Statement in Support of Employment Protections for Transgender People

Attorney General Jeff Sessions' memo reversing the DOJ’s interpretation of Title VII and attempting to rescind employment protections for transgender people is another act of blatant discrimination threatening the lives and livelihoods of transgender communities. Transgender people, especially trans women of color, already experience high rates of workplace discrimination, and in a context of broader and growing violence against their communities. The Title VII protections for gender identity are clear under this country's civil rights law and numerous court rulings, and this flagrant effort to strip basic workplace protections from people who already experience pervasive transphobic discrimination is both inhumane and unlawful. CCR expresses our solidarity with transgender communities in resisting these escalating attacks and stands with them in the struggle to live and work in dignity.