CCR News: What are SAMs? 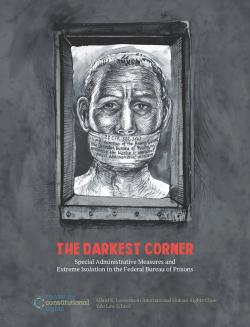 On Thursday, CCR and the Allard K. Lowenstein Human Rights Clinic at Yale Law School released a report documenting the U.S. government's use of Special Administrative Measures (SAMs), a secretive form of extreme isolation in federal prisons disproportionately imposed on Muslims. The report, The Darkest Corner: Special Administrative Measures and Extreme Isolation in the Federal Bureau of Prisons, documents the abuses of SAMs, which compound the debilitating effects of solitary confinement and impose near-total isolation. The measures prohibit prisoners' contacts and communications with all but a handful of government-approved individuals, and impose a second gag order on even those few individuals who can have contact with a prisoner subject to SAMs. The Attorney General has sole discretion to impose and extend SAMs, which can be authorized for up to a year at a time and reauthorized indefinitely, and prisoners have no meaningful avenue to challenge the designation.

CCR wrote last week, "The Trump administration's latest iteration of the Muslim ban, announced on Sunday night, is yet another failed attempt to repackage a white supremacist policy that is unconstitutional and in violation of international law. And despite eliminating Iraq from the list, and adding two non-Muslim-majority countries that have negligible numbers of migrants to the U.S., it's patently obvious that the intent of this executive order remains to prevent Muslims from entering the U.S." It’s still a Muslim ban. Call it what it is.The report documents that some prisoners have been living under these conditions for decades. It also underscores how SAMs have been disproportionately imposed on Muslims, representing the extreme end of a spectrum of "counterterrorism" measures that have targeted Muslims since 9/11, and the particular risks for abuse under the current administration.

We are proud to endorse the #NoMuslimBanEver campaign and help mobilize communities and allies in the weeks leading up to October 18, 2017, the date the latest iteration of Trump's travel ban will go into effect. This is an important moment for us to organize a strong, loud, mass mobilization that sends a clear message to this administration: Muslim communities are organized, with allies by their side. We will not be silent and we will stand up for our communities in the face of any and all discriminatory policies.

Please visit the #NoMuslimBanEver website for additional information, including how to endorse the campaign, and other ways to get involved. For those of you interested in joining us for the rally and march on October 18 in Washington, D.C., you can join the Facebook event.

Two things you may not think of together: art and Guantánamo. And yet, for many of our clients, art was a way to imagine—and hope—for life beyond the prison walls. Creative storytelling has been a central partof CCR's work toward closing Guantánamo, and artists have been longtime allies in our efforts to bring attention to the devastating impact that Guantánamo and other "War on Terror" laws and policies have had on individuals and communities 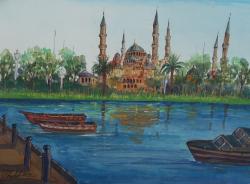 If you're in New York, you have an amazing opportunity to see some of that art and hear CCR speak about the current situation at Guantánamo: October 2 – January 26, Ode to the Sea: Art from Guantánamo Bay is at the President's Gallery, John Jay College of Criminal Justice. Starting today, eight former and current detainees, including CCR clients Djamel Ameziane and Ghaleb Al-Bihani, will show select pieces of artwork: drawings, paintings, and three-dimensional works crafted from the few materials permitted to detainees, including model ships made from parts of shirts, prayer caps, razors, and mops. There will also be a symposium with CCR advocacy program manager Aliya Hussain on October 16: What Does It Mean to Make Art at Guantánamo? Please join us!

In Memorium: We mourn the loss of Barbara Blaine, founder of SNAP – Survivors Network of those Abused by Priests, and international human rights champion Prof. Cherif Bassiouni

Last Sunday, our dear friend and colleague Barbara Blaine died unexpectedly. Barbara founded SNAP, the Survivors Network of those Abused by Priests, and we worked closely with her to bring SNAP's quest for justice and accountability to international bodies like the Committee on the Rights of the Child at the United Nations and the International Criminal Court in The Hague. CCR's Pam Spees called her "a visionary advocate for survivors everywhere" in a moving tribute on our blog, and CCR issued a statement honoring "Barbara's fierce, tireless spirit that left so many thousands of people around the country and around the world knowing that they are not alone and that their voice will be heard." Our hearts go out to Barbara's family and friends and everyone whose lives she touched and empowered. We stand in solidarity with the movement of powerful advocates who will carry on her legacy. 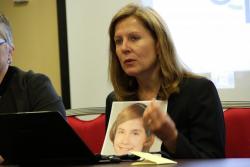 The very next day we lost another hero in the struggle, international human rights champion Prof. Cherif Bassiouni, whose work documenting rape as a war crime in Bosnia advanced the claims of survivors brought in a CCR case, Doe v. Karadzic, and who served as an international law expert in our ongoing case, Sexual Minorities Uganda v. Lively, where he explained how persecution on the basis of sexual orientation and gender identity amounts to a crime against humanity in international law. His wisdom and his passion were an inspiration to human rights lawyers and activists around the world.