To mark the 23rd of the month, invoking the 23 hours per day that prisoners spend isolated in special housing units, activists throughout California are taking action to bring attention to prison conditions. Below, Kijana Tashiri Askari, a class member in Ashker v. Governor of California, shares his experience of being released into the general prison population following a settlement in the case that effectively ended long-term solitary confinement in CA prisons.

I was interned to indefinite solitary confinement status on August 12, 1994, for the sole act of commemorating my ancestors historical legacy of resisting U.$. Imperialism, during the month of Black August. I was transferred from Pelikan Bay SHU to CCI – Tehachapi’s SHU Unit in March 2015 via a short stint at Corcoran SHU, while C.D.C.R. Administrators were attempting to sabotage the Ashker v. Brown class-action, by evacuating all long term (i.e. “11 plus years”) prisoners from Pelikan Bay SHU, to other SHU units.

The news of the Ashker v. Brown class-action settlement agreement, being reached on September 1, 2015, was bitter-sweet for me. As I simultaneously received news of my beloved fatha being terminally ill!! For many of us, re-uniting with loved ones and family, has been and remains to be a goal of ours. I would love nothing more than to have a contact visit with my fatha, before he makes his transition to be with our ancestors.

So upon being released to Kern Valley State Prison’s (KVSP) General Population on November 4, 2015, I immediately began the process of being sent to a prison, so I could be near my dying fatha. Instead of this taking place, “Classification Staff Representatives” (CSR-reps), obstructed this from happening, by transfering me 30 minutes up the road to SATF (Substance Abuse Treatment Facility – Corcoran) Prison.

SATF’s Associate Warden T. Wan attempted to address this matter, by granting me a “hardship transfer over-ride” to a lower level prison (i.e. “Conf-Vacaville”). But yet again, CSR-Reps obstructed this from happening. By transfering me to CSP-Sacramento (New Folsom), and this is in spite of physician letters and I.C.C. Committee members making it absolutely clear: “my ailing fatha cannot drive more than 30 minutes.” CSP-Sacramento (New Folsom) is well beyond 30 minutes from Oakland, California!

My time in General Population hasn’t been all “soda apples,” as I was able to enjoy a contact visit with human rights activist Jackie Sumell on March 2017. Many may know Jackie Sumell from her work with the Angola 3, in particular, with the documentary “Herman’s House,” that featured comrade Herman Wallace’s 40 plus years in solitary confinement. I was able to enjoy a plate of hot wings, king size Reese’s peanut butter cups and a large Sprite soda during our visit :-) These are things that I was deprived of for 21 consecutive years! 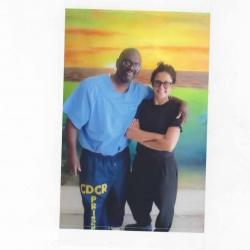 Kijana Tashiri Askari and a visitor

Jackie Sumell and I also took some photos, which are posted at:
www.solitarygardens.org
https://www.facebook.com/profile.php?id=100014117312319

The ironic thing about our visit, is that it almost didn’t happen. As SATF prison administrators gave Jackie an extremely hard time, about letting her in to visit me. For example, they asked Jackie numerous invasive questions like: “Who are you?;  What do you do for a living?; Why did you travel so far (i.e. “New Orleans”), and is trying so hard to visit with a prisoner like me?”

Of the 3 General Population mainlines (i.e. “KVSP, SATF, “New Folsom”) that I’ve been on so far, SATF is clearly the most stable, as far as “prisoner solidarity” goes. And as a result, we were able to bring a number of rehabilitative programs to SATF, that a lot of us being released from long-term solitary confinement status need for the parole board.

We’ve also initiated the “Community Release Board” (CRB) as a basis for replacing C.D.C.R.’s capitalist-based, profit driven parole boards. For more information about and how you can get involved with the CRB, write to:

Members of the community are encouraged to contact me at: