How to Turn the KKK Into the Counter-Protesters

Last night, we sent out an email about the senseless tragedy that occurred this weekend in Charlottesville. An excerpt:

We lay this weekend’s violence squarely at the feet of Donald Trump. His rhetoric and staffing choices — as well as speeches and policy priorities — conjure White Ethno-Nationalist values on an almost-daily basis. In the last month alone, the DOJ has declared that it will make discrimination against white people a priority and the DHS has formalized a preference for English speaking immigrants. This is to say nothing about the Muslim ban or the wall at the southern border. Taken together, they seek to re-establish a sense of white cultural dominance in which the opportunities of people of color to succeed come second to others, if at all. The white supremacists have absorbed the message of government endorsement: they abandoned the anonymity and darkness historically connected to their public displays of hate and lawlessness, emboldened to march in broad daylight without hoods covering their faces.

If you didn't catch it then, you can read it now on the CCR blog. 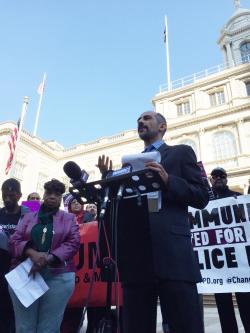 Saturday marked the fourth anniversary of Judge Shira Scheindlin's ruling in Floyd, et al. v. City of New York that stop-and-frisk practices are unconstitutional and racially discriminatory. As part of the ruling, Judge Scheindlin ordered a court-appointed monitor to oversee a series of reforms to NYPD policing practices and also ordered a Joint Remedial Process to solicit input from a variety of stakeholders, including New York communities most directly affected by policing.

Four years on, and despite the progress made thus far, it's clear that we still have a long way to go. While documented stops are down, we know that many encounters with police aren't actually recorded, raising the question of whether they're being done lawfully. In addition, the numbers demonstrate that stark racial disparities in who is stopped remain. The independent monitor's report, filed in May of this year, highlighted the fact that Black pedestrians are significantly more likely than whites to be frisked during a stop, but that these searches are much less likely to turn up a weapon.

The NYPD has touted its proposed implicit bias trainings, but this is just one piece of the puzzle. The enormous task of ensuring the department is in compliance with the law still remains. Ensuring enforcement of these reforms is crucial, as is consistent discipline of police officers who run afoul of the law. The current system lacks transparency — the public is never told whether an officer will be disciplined for infractions — which in turn worsens the already justified mistrust that Black and Brown communities in NYC feel toward the NYPD.

Changing the culture and practices of an institution as big as the NYPD will take time. CCR has long argued that the best policies and the best training in the world will do little to change the department without a commitment to reform at all levels of leadership. To succeed, reform must be comprehensive: the NYPD has to overhaul the way it trains, supervises, evaluates, and holds its officers accountable to the communities they serve. As this process continues, we will fight for total transparency and constitutional policing and we will keep you apprised every step of the way.

This year marks the 30th anniversary of CCR's Ella Baker Summer Internship Program, a training program named after the pioneering civil rights activist, which provides intensive experience working on CCR cases for first- and second-year law students. Our goal is to train talented and committed law students to work alongside social movements, community organizations, and impacted individuals. The program allows students to gain practical litigation experience, bridges their theoretical understanding of the relationship between organizing and lawyering, and introduces them to CCR's approach to social change work. 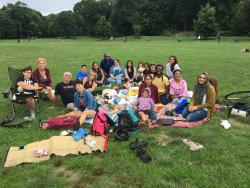 Throughout the summer, students work with CCR staff on active cases and advocacy campaigns. In addition, we bring in CCR clients, movement allies, and other advisors to speak with students about all aspects of our work. At the same time, students build a cohort with their colleagues that will further expand our growing network of CCR-trained lawyers from around the world.

This summer, we were thrilled to welcome 12 talented and bright law students and one undergraduate student from across the U.S. They came from as far away as UCLA and Vanderbilt and as close as Columbia and Fordham, and we were truly fortunate to have them here. In addition to the diversity of viewpoints and interests they brought to their work, the Ellas also brought an inspiring passion and enthusiasm for everything they learned.

Our late President Emeritus Michael Ratner absolutely loved this aspect of CCR's work and took great pride in working to instill each summer's Ellas with the strength, tenacity, and courage needed to do this work. For both Ella Baker and Michael, we will continue to train those who want to continue the fight for equality and social justice.

From all of us at CCR, goodbye and thank you to this summer's amazing and wonderful Ellas! We know you're following in Ella Baker's footsteps.