Last week’s New York Times op-ed is the latest in a long history of attempts to discredit movement leaders
August 9, 2017

Last week, the New York Times published a remarkable piece by Bari Weiss, newly hired by the Times from the Wall Street Journal, titled “When Progressives Embrace Hate.” The piece, which self-consciously seeks to decapitate the vanguard of the radical social justice movement in service of her centrist, pro-Israel politics, directs its attack on Women’s March organizers Linda Sarsour, Tamika Mallory, and Carmen Perez. It is the kind of predictably reductionist strategy leveled against this country's visionary social justice pioneers through the centuries.

Weiss purports to be concerned about “identity politics” and its imagined hold on the Democratic Party (imagined, as the mainstream political operation pays little attention to the calls for justice coming directly from marginalized communities). But, rather than engage thoughtfully and transparently to offer a harmonizing message for the Left, she chooses the tried-and-true tactic of a hit job. Weiss ignores the breadth of Sarsour, Mallory, and Perez’s activism and the depth of their coalition building to pin up the usual, hackneyed targets—suggesting these leaders “regularly fawn” over Louis Farrakhan and that Sarsour obsesses over Zionism. Weiss is no doubt threatened by the activists’ critique of the Israeli government’s systematic oppression of Palestinians—situated as it should be, in a broader critique of state-directed discrimination, repression, and imperialism. But in so doing, she surfaces the absence of her own progressive bona fides. Indeed, one could say Weiss’s attack itself comes from her own place in identity politics, as a vocal supporter of Israel and Jewish nationalism within the Jewish community.

So, naturally, she is threatened by Sarsour’s objection to Zionism; Weiss seeks to rally centrist Democrats to continue to align with the power of the Israeli state, rather than imagine that the direction of progressive principles would lead one to recognize that Palestinian Lives – like Black Lives and Trans Lives and Women’s Lives – Matter. Weiss disregards the depth of this perspective as well as the Women’s March organizers' recent focus on broad-based issues like defending healthcare and denouncing the vitriolic rhetoric of the NRA. Individually, Sarsour has been a racial justice and LGBTQI advocate for years, and as a Palestinian-American, has indeed championed a peaceful vision for justice in Palestine. Mallory helped create the NYC Crisis Management System, a gun violence prevention program that endows nearly $20 million annually to violence intervention organizations. Perez, a mentee of civil rights icon Harry Belafonte, has been actively working on violence reduction among gangs. 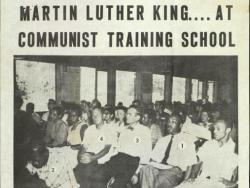 Weiss’s attempt to discredit the organizers ultimately represents a standard move in the chapters-long reactionary playbook—one that counsels a take-down of the more radical U.S. social movements in the name of supposed moderation. We all remember the effort to tar Martin Luther King Jr. as a communist to distract from his call for social justice—but less well known is the fact that celebrated liberal icon Robert F. Kennedy, in his role as attorney general, first authorized the FBI wiretapping in 1963 that stoked the attack.

Or there is Ida B. Wells, a leader of the campaign against lynching in the United States nearly 125 years ago. In 1893, facing what she called “silent indifference” to the crisis at home, she traveled to Great Britain where she gave lectures calling attention to the complicity of white women suffragettes in failing to stand up to lynching mobs, who often invoked allegations of rape. As her critique – and call for intersectional solidarity – gained traction, two white women suffragettes wielded their own influence to arrange for discrediting articles in both the British and U.S. press—the Memphis Commercial defamed her character and denounced her speeches as “foul and slanderous.”

And there are countless others. President Woodrow Wilson, a scion of mainstream Democratic politics, initiated one of the most repressive periods in U.S. history by signing the Espionage Act, which authorized the silencing and imprisonment of hundreds of radicals and anti-war activists, signaling that critics of war making and social injustice were outside the legitimate bounds of public discourse.

Weiss’s attack on the Women’s March leaders is not only cynical and misguided on its own terms; ultimately, it serves to legitimate the caricature conservatives have deployed throughout the centuries to demean social justice pioneers. Sarsour, Perez, and Mallory are tackling complicated issues of concern to millions of marginalized communities, and their visionary leadership in this broad-based movement should be supported now more than ever.