Standing in solidarity with peace activists denied entry by Israel

In July, Lufthansa Airlines prevented five members of an interfaith delegation to Israel and Palestine from boarding their flight from Washington, D.C., to Tel Aviv, reportedly following instructions from the Israeli government. The five delegates are from Jewish Voice for Peace (JVP), American Muslims for Palestine, and the Presbyterian Peace Fellowship. 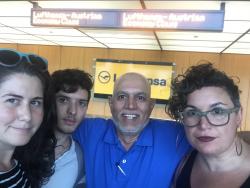 JVP’s Rabbi Alissa Wise was one of the activists turned away at the airport. "I'm heartbroken and outraged," she said. "This is yet another demonstration that democracy and tolerance in Israel only extends to those who fall in line with its increasingly repressive policies against Palestinians." Shakeel Syed, a national board member with American Muslims for Palestine and another member of the delegation, said that the Lufthansa representative "informed me that they had a direct order from 'Israeli immigration authorities' to not allow us to board the plane." The five had planned to meet with interfaith organizations, grassroots activists, and human rights groups.

CCR condemns the Israeli government's effort to silence these human rights defenders, which is consistent with a longstanding pattern of crackdowns on groups from Palestine, the U.S., and even the United Nations. This blatant disdain for freedom of expression is part and parcel of broader efforts to suppress Palestinian rights advocacy in the U.S. and Palestine/Israel. We are calling on the U.S. State Department to advocate on behalf of its own citizens who are working to defend Palestinian rights and to challenge Israel’s discriminatory actions. Efforts to promote human rights should be welcomed and encouraged, not impeded, particularly at this time of increasing disregard by the U.S. for human rights engagement.

For more information, read our blog post. Visit the Palestinian solidarity section of our website for more about our work on this subject.

New materials from our friends at Immigrant Defense Project

In January of this year, CCR worked with Immigrant Defense Project (IDP) to launch the #StopICECold toolkit. Now, IDP has expanded and reorganized its suite of community defense materials to support those standing up the attacks on immigrants, including new updates about ICE under the Trump administration and responses to frequently asked questions about raids.

Visit immdefense.org/raids for a revised edition of the #stopICEcold toolkit in English and Spanish; emergency planning resources (including webinars and videos); and Know Your Rights flyers in 16 languages (including Arabic, Bangla, Haitian Creole, French, Punjabi, Mandarin, and more).