The forgotten men at Guantánamo, the U.S. refusal to acknowledge wrongdoing

Bertha Justice Institute fellow Noor Zafar wrote an essay on her first trip to the prison at Guantánamo Bay, which appears online at Mother Jones. Noor recounts her visits with CCR client Sufyian Barhoumi, a forgotten prisoner who has been detained at Guantánamo for 15 years without trial:

A guard tower at the U.S. detention camp in Guantánamo Bay, Cuba. by Maren Hennemuth/ZUMA Press

When our meeting time ends, Sufyian stands up, as if we are his guests and he is going to escort us to the door. His left leg is chained to the floor, so he shuffles a few inches and we say our goodbyes. "See you — what's the Urdu word for 'tomorrow'?" Sufyian asks me, picking up on an earlier part of our conversation in which he showcased his budding knowledge of Urdu after learning that it was my native tongue. "Kal," I say. "Hum kal milengay." We will meet again tomorrow.

Noor says she was inspired to write about her visit because it was an entirely different experience than she had expected. "It was such a hollow place, so devoid of humanity, that in order for me to process and make sense of it all, I needed to write," she says. "I was also so deeply touched by speaking with Sufyian — meeting someone who has suffered such profound injustice yet continues to be hopeful and kind — that I wanted to honor that and humanize him for people who know him only as a statistic."

Read the entire piece at MotherJones.com.

Then, on the CCR blog, read advocacy program manager Aliya Hussain's post about Omar Khadr, and what the Canadian government's settlement and formal apology means:

Redress for victims of torture is a universal right enshrined in the UN Convention Against Torture — a fact dismissed by both critics of Canada’s widely publicized apology and the U.S. government. President Obama, who advocated for Guantánamo’s closure and publicly acknowledged that “we tortured some folks,” failed in the same breath to say what would have mattered the most: that he was sorry we tortured those folks. Substantively, he failed to use his power to open any credible investigation and call former Bush officials responsible for the torture program to account. Over the last 15 years, more than 700 men have been released from Guantánamo, and to this day, not one has received compensation or an apology from the U.S.

It's not too late to vote for CCR 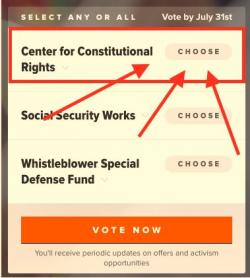 We're entering the home stretch of our July CREDO Donations challenge. Have you voted for CCR yet? Remember, your vote helps us earn a bigger portion of CREDO's donation—it means tens of thousands of dollars to help us do the work that we do.

Here's how it works:

It's a quick and easy way to show your support for our work. If you've already voted, please forward this message to family and friends and ask them to vote for CCR. Every vote makes a difference! Thank you for standing with us!

Apply for our fall internship opportunities

Are you a second- or third-year law (JD) student or LLM student? Are you passionate about social justice? CCR is looking for fall interns to provide legal research and analysis as part of a semester-long unpaid internship or externship opportunity. As an intern, you will spend 10 to 20 hours per week between September and December 2017 assisting attorneys on a range of projects. This position is also open to students seeking full-time, semester-long externships.

Our goal with internships is simple: we want CCR's legacy to live on through the next generation of attorneys. As Ruby-Beth Buitekant, a 2016 Ella Baker summer intern, wrote about her experience: "We challenged the exceptionalism that is often taught in law schools and instead were encouraged to think about the ways that the law can support of organizers and movements. We talked about the power of listening, learning from organizers and taking a back seat — not something lawyers are typically trained to do." This is an amazing opportunity for law students who are committed to social justice, organizing, or social movements in general and who want to sharpen their skills in a fast-paced legal environment.

The deadline to apply for fall internships is August 11, but applications will be considered on a rolling basis and strong consideration will be given to early applicants. Read more and apply on our website.