We filed an important new case for asylum seekers at the U.S.-Mexico border 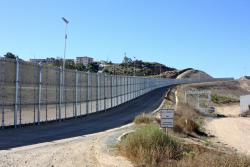 Asylum seekers fleeing persecution and violence are being illegally turned away at the U.S. Southern Border. Since Trump’s election in November, an emboldened Customs and Border Patrol (CBP) have used myriad unlawful practices to turn away asylum seekers, and reports from the border are dire. On Wednesday, CCR joined the American Immigration Council to file a class action lawsuit representing the organization Al Otro Lado and individual asylum seekers. The case challenges CBP and the Department of Homeland Security's practice, in violation of U.S. and international law, of systematically forcing individuals fleeing persecution to return to countries where they face grave violence and the risk of death. Read more about the case here.

Women in particular – especially transgender women – and children can experience extreme violence when fleeing their home countries, facing rape, assault, and extortion. Black immigrants are also facing escalating denials, with many Haitian refugees seeking asylum at the border. U.S. foreign policy fueling violence and instability in Central America for decades is a root cause of this rising refugee crisis, now being exacerbated by the Trump administration's escalation of draconian immigration policies. Anyone fleeing violence and persecution has the right to apply for asylum, and CCR is fighting to protect that right.

Help us keep up the fight by voting for CCR!

CREDO Mobile chose CCR as one of its grantees for the month of July: the number of votes we receive determines how big a share of the $150,000 grant we will get.

We are asking for your vote — and your help in spreading the word.

Please take a moment to vote for CCR! Voting is free and fast — and you do not have to be a CREDO member or customer to cast your ballot. With just a few clicks, you can help advance legal protections for the most vulnerable and strengthen progressive movements that strive for justice and equality. Thank you for your help — and all you do for CCR!