Palestinian solidarity should not be stifled at Fordham

On Friday, in the latest development in our case, Awad et al v. Fordham University, Fordham students filed their opposition to the school’s motion to dismiss their lawsuit over its refusal to grant club status to Students for Justice in Palestine (SJP). 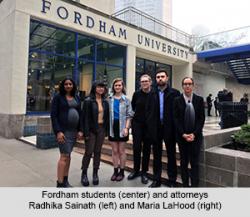 CCR and Palestine Legal sued Fordham on behalf of the students on April 26, 2017, and the university aimed to block the lawsuit with a motion to dismiss they filed on June 5, 2017. In Friday's filing, we argued that Fordham violated its own policies regarding free expression by denying SJP official club status on the basis of its political message. Furthermore, Fordham violated its own procedures for granting clubs official recognition by subverting the process so that the Dean of Students could veto the student government’s decision.

“Fordham’s decision to deny students the ability to form a club to express their political views and educate the Fordham community on Palestinian rights flies in the face of their commitment to free expression and open inquiry,” said Center for Constitutional Rights deputy legal director Maria LaHood. “Collectively advocating on behalf of Palestinians or in support of BDS should not be banned any place, much less at a University which also touts its commitment to promote justice and protect human rights.”

Ahmad Awad, a ‘17 Fordham graduate and petitioner in the lawsuit, said, “Fordham’s continued denial of students’ rights to express our political views on campus is unacceptable. I will continue with Fordham students to fight until the university recognizes our right to advocate for Palestinian human rights.

Fordham's behavior reflects a growing trend of hostility against advocacy for Palestinian rights, especially on university campuses; Palestine Legal responded to 650 incidents of suppression targeting speech supportive of Palestinian rights from 2014 to 2016. As the world marks 50 years of Israel's occupation this summer, the question remains: Why does Fordham believe that refusing to allow discussion of Palestinian human rights is somehow aligned with its Jesuit mission?

Join us on the frontlines of justice by voting for CCR! 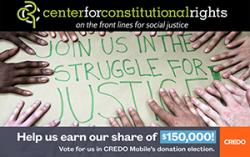 As we mentioned last week, CREDO Mobile has chosen CCR as one of its grantees for the month of July! The number of votes that CCR receives determines how big a share of the grant we will get — and we are lagging behind the competition. We are asking for your vote — and your help in spreading the word.

Please take a moment to vote for CCR! Voting is free and fast — and you do not have to be a CREDO member or customer to cast your ballot. With just a few clicks, you can help advance legal protections for the most vulnerable and strengthen progressive movements that strive for justice and equality. Thank you for your help — and all you do for CCR!

Reflecting on a somber anniversary and remembering Isis and Berta

On June 28, 2009, in Honduras, President Manuel Zelaya, who was democratically elected and later embarked on a platform of progressive reform, was kidnapped by the Honduran army and flown out of the country in the middle of the night from an air field controlled by the U.S. military. 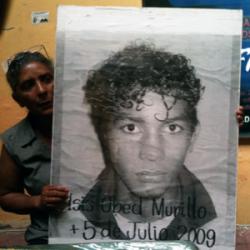 On July 5, President Zelaya attempted to return by airplane to Honduras and restore the democratically elected government. Nineteen-year-old Isis Obed Murillo and his family joined thousands of other coup opponents at the Toncontin International Airport for a nonviolent, peaceful gathering to welcome Zelaya back and support the restoration of democracy. Honduran military troops and vehicles blocked the runway and the military began firing tear gas and live rounds into the crowd of unarmed civilians—Isis was shot in the head and killed.

In 2011, on behalf of Isis' parents David Murillo and Silvia Mencías, CCR filed a complaint in the Houston Division of the Southern District of Texas against Roberto Micheletti Baín, the former president of the Honduran National Congress who assumed the role of head of the de facto government immediately following the coup d'etat. Although there was little question of Micheletti's culpability — even the Honduran Truth and Reconciliation Commission, a body of questionable independence and impartiality, found that he bore responsibility for the killing of Isis and others — the court dismissed the case following the Supreme Court decision in Kiobel v. Royal Dutch Petroleum, which limited the extraterritorial reach of federal courts in such cases. In 2012, in support of our partners and allies, CCR and International Federation of Human Rights submitted evidence to the International Criminal Court in the Hague calling for investigation and prosecution of crimes against humanity in Honduras.

In marking this anniversary of Isis' death, we are reminded of the fact that he was the first victim in what became a systematic and widespread attack on dissent; since the coup, hundreds of people, including journalists, trade unionists, campesino activists, indigenous communities, coup opposition leaders, and human rights defenders have been killed or disappeared. At the time of the coup, observers and experts warned that if Zelaya was not restored to office and the forces behind the coup were allowed to proceed without any accountability, it would be disastrous for Honduras and the region. Tragically, they were correct.

The murder of beloved and visionary indigenous land rights leader Berta Cáceres in 2016 was emblematic of this prediction, but also a catalyst for change. As CCR senior staff attorney Pam Spees recently wrote on our blog:

Incredibly, in the face of escalating violence and economic scarcity, profound unfairness, hypocrisy, and callousness, the struggle in Honduras to realize a vision of a just future persists. "Berta didn't die, she multiplied," goes a popular chant in Honduras. Earlier this month, [Civic Council of Popular and Indigenous Organizations in Honduras] secured a major victory in a campaign begun by Berta when, after years of pressure from the indigenous Lenca community to stop the construction of a hydroelectric dam on their sacred land, financial backers were pressured into revoking funding from the project.

A New York Times op-ed last week put it plainly: "It is time for Congress and the American public to take a closer look at security assistance and reconsider the policies driving the costly United States 'war on drugs' in the region." One such effort is the Berta Cáceres Human Rights in Honduras Act, a House bill that seeks to end U.S. financial support for the police and military in Honduras. While the bill has garnered over 50 cosponsors and 182 organizational endorsements already since it was introduced a year ago, more are needed. On this somber anniversary, please take a moment to learn more about the bill and ask your U.S. representatives to cosponsor it.