Today marks the five-year anniversary since NYPD officer Richard Haste killed 18-year-old Ramarley Graham in his Bronx home. The five-day departmental trial of Officer Haste wrapped up last week, and the presiding departmental judge is expected to give her recommendation to NYPD Commissioner O’Neill by February 3. Commissioner O’Neill is under no obligation to follow it or publicly reveal what his decision is because of existing legislation which permits secrecy in departmental trials.

There was a lot wrong with Haste’s week-long “trial.” The absence of any civilian witness testimony undermined the legitimacy of the court. At no point was Ramarley’s grandmother, Patricia Hartley, or the ground floor resident who allegedly consented to Haste and his partner McLaughlin entering the apartment building, given the chance to testify. Ramarley’s grandmother was not only present when Ramarley was killed, she was also threatened by Haste after he killed Ramarley. The departmental trial was limited to the “technical” question of determining whether Haste’s actions were proper, and therefore no civilian testimony was deemed necessary. But how can a decision maker determine whether the urgency, danger, and stressfulness of the circumstances were in fact real and the officer’s actions justified without impartial outside testimony? When a court does away with this principal it becomes an illegitimate court.

Haste and McLaughlin emphasized how quickly everything happened. They consistently referred to Ramarley as the "perp" and "suspect" and Ramarley’s possession of “the gun,” as if its presence was an accepted fact. But no gun was ever recovered in or around the property. Criminalizing Ramarley through this choice of language during the trial was not met by any objections by the departmental advocates prosecuting Haste, the people charged with ensuring the facts were clarified and Ramarley was accurately depicted.

It is true that the events on February 2, 2012, happened quickly, but not for the reasons the NYPD officers claimed. From the time Ramarley walked calmly into his house and shut the door to the time the police hastily removed his body after shooting him, hardly 15 minutes had passed. Having noticed Ramarley “walking with a purpose” with his hand allegedly in the waistband of his pants, the Bronx Special Narcotics Enforcement Unit decided to follow him. This was hardly a “hot pursuit” as characterized by the NYPD officers present. The NYPD bust into his home in a cavalier and reckless manner. They kicked in the front door with no warning or request for it to be opened. They failed to call in backup or the highly specialized Emergency Services Unit, who generally engage "barricaded perps" verbally to deescalate situations. Haste and his team also failed to clear the area, a standard procedures for apprehending a suspect when real danger is perceived. It is highly unusual for a body to be removed this quickly following a fatal shooting. Not surprisingly, there were discrepancies in accounts of where Ramarely’s body was when he was shot. During testimony during the trial the police officers involved also made the extraordinary inference that, because the scene was not secured, the gun Ramarley allegedly had must have been removed. Neither of these things would have been in issue if the incident had been handled professionally by an external investigator.

During the trial, Ramarley’s mother, Constance Malcolm, attended with Gwen Carr, Eric Garner’s mother. They both say that the “true facts of the story aren’t being told.” Constance held a press conference to set the record straight. She played the complete video footage from the cameras outside the apartment building which clearly contradicted the NYPD narrative. Confirming the above tactical violations, it depicted the officers taking over three minutes to enter the premises, turning their backs multiple times to the entrance to the property, failing to clear the area and pressing their faces to the doorway glass to try and see through – actions that Inspector Sheehan, the Commanding Officer for the Special Training Section of the NYPD, told the court were indicative of egregiously poor tactical judgment. These actions go further and reveal the degree of fabrication involved in the official NYPD story that they "feared for their lives." The erasure of civilian testimony and the curation of the video footage showing in the courtroom were two legal tactics which were used by the NYPD to create an alternative narrative and assist in shielding Haste.

The full video also tragically depicted Ramarley’s then-six-year-old brother, Chinnor Campbell, being led out of the apartment into the freezing cold, crying hysterically, and dressed in only a t-shirt. Separated from his grandmother, traumatized from seeing his brother being shot, he was passed between officers, none of whom offered him a coat or other covering in the frigid February cold. This is despite Haste remarking on the stand that he was driven to act quickly by the interest in protecting any children in the building. Soon afterwards, the video shows Ramarley’s bloodied body being carried out and carelessly slung onto a gurney. At the press conference, Constance revealed that the police also later lost Ramarley’s body for days. The treatment of Ramarley’s body, both at the scene and afterwards, coupled with the absence of any consequences for the officers, reveals the NYPD’s complete failure to live up to its mandate of courtesy, professionalism and respect when it came to Ramarley as an 18-year-old Black teenager in the Bronx.

Ramarley’s mother, Constance Malcolm, considers it a personal slap in the face that “Haste refused to apologize in court. That was his opportunity and instead he chose to justify himself.” She told me, “I fight not just for Ramarley but also for Chinnor…I have to raise a Black boy in this country, this is why I fight so hard to get things done and changed. I don’t want to bury another child.” Trials such as this create further division between the police and the communities they purport to serve and undermine comments by Mayor De Blasio about bridging that gap. 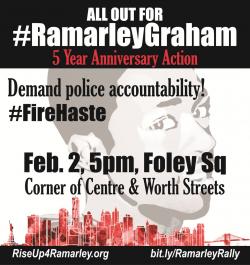 Join us tonight to demand justice for Ramarley Graham.

Constance said, “This trial raises the question of whether the NYPD is seeking to root out bad officers or covering up for them…We are skeptical and the public should be too.” The key provision that Constance would like to see changed is New York Civil Rights Law § 50-a. This section excludes from public access “all personnel records used to evaluate performance toward continued employment” relating to police and corrections officers unless mandated by a lawful court order. The Committee on Open Government within the New York Department of State has recommended that this exemption be removed to increase transparency and accountability.

As we peer into the terrifying abyss of the Trump presidency, and begin to make out the shape of what is to come, it is difficult to hope that transparency or accountability will improve. “Does anyone really remember the details of a course from training they received years before?” asked Haste’s defense attorney, Stuart London. London also chillingly stated, “Police work should not be judged by the end result…or second guessed.” Justice for Ramarley Graham is far from served: officers have avoided accountability and been rewarded with promotions. This is unacceptable.

Join us to demand justice for Ramarley Graham at 5 p.m. today at Foley Square. Can’t make it? Sign and share this petition from The Nation and Communities United for Police Reform (CPR) calling for the firing of Officer Richard Haste and ALL officers involved in the killing of Ramarley Graham and related misconduct.

Amy Myers is an Australian JD candidate in the final year of her law studies. She is interning at CCR and interested in government accountability, racial justice and prison reform.