Standing Up for Standing Rock

As I sat at my desk here in New York and learned that the original sacred fire had been extinguished at Oceti Sakowin, and a new one built, I thought about the time I spent there, at Standing Rock in North Dakota, just two weeks ago. I arrived on December 3, with plans to stay for 48 hours before returning to NYC to finish my legal internship at CCR. As it would turn out, this was the day before the Army Corps announced they would not grant the easement for the Dakota Access Pipeline. As an Australian, I consider myself incredibly fortunate to have witnessed the dedicated work of the Water Protectors, and to have learned about the long history of indigenous resistance to U.S. colonization from those who had experienced it firsthand. At Standing Rock, the Lakota were joined by over 100 other tribes to protect their land from the pipeline. 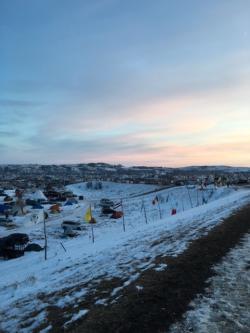 The beauty and expansiveness of Oceti Sakowin Camp at sunset

I encountered two hurdles on my journey there. First, I learned before I flew out that my car rental booking had been inexplicably cancelled, and there were no other cars available anywhere near Bismarck, my original destination. My only option was to reroute my flight to Minneapolis and drive the eight hours through the night from there. Then, when I finally neared Cannon Ball, ND, I discovered the police had blocked the quicker, more direct route on Highway 1806, and so I took a further detour that added another 45 minutes to the journey.

When I arrived, the sun was barely up and the countryside was covered in snow; despite this, several people at Sacred Stone camp were already getting the day started. The camp felt still and prayerful. Later that morning, in flagrant disregard of the no-fly zone above the camps, a light plane and a DAPL helicopter circled the broader protest encampments. Their presence shattered the calm and I feared they were there for surveillance. Several people at the camp told me to put my phone in airplane mode to avoid potentially having my data collected.

Having seen the media accounts of water cannons, vicious police dog attacks on protesters, chemical warfare being used against protesters in the form of tear gas, and police shooting people with rubber bullets, I arrived anticipating trouble. One woman I spoke with that weekend warned me to make sure I was wearing thermals because police were taking protesters’ outer clothes from them and leaving people in small pens, sometimes for up to two days; she added that “police are harsher if you look native.” My first day, on two hours’ sleep, I helped dig a latrine hole and sorted some donations. I felt such profound gratitude for the indigenous Water Protectors who had been there for months before me; I was glad to help, even in some small way. 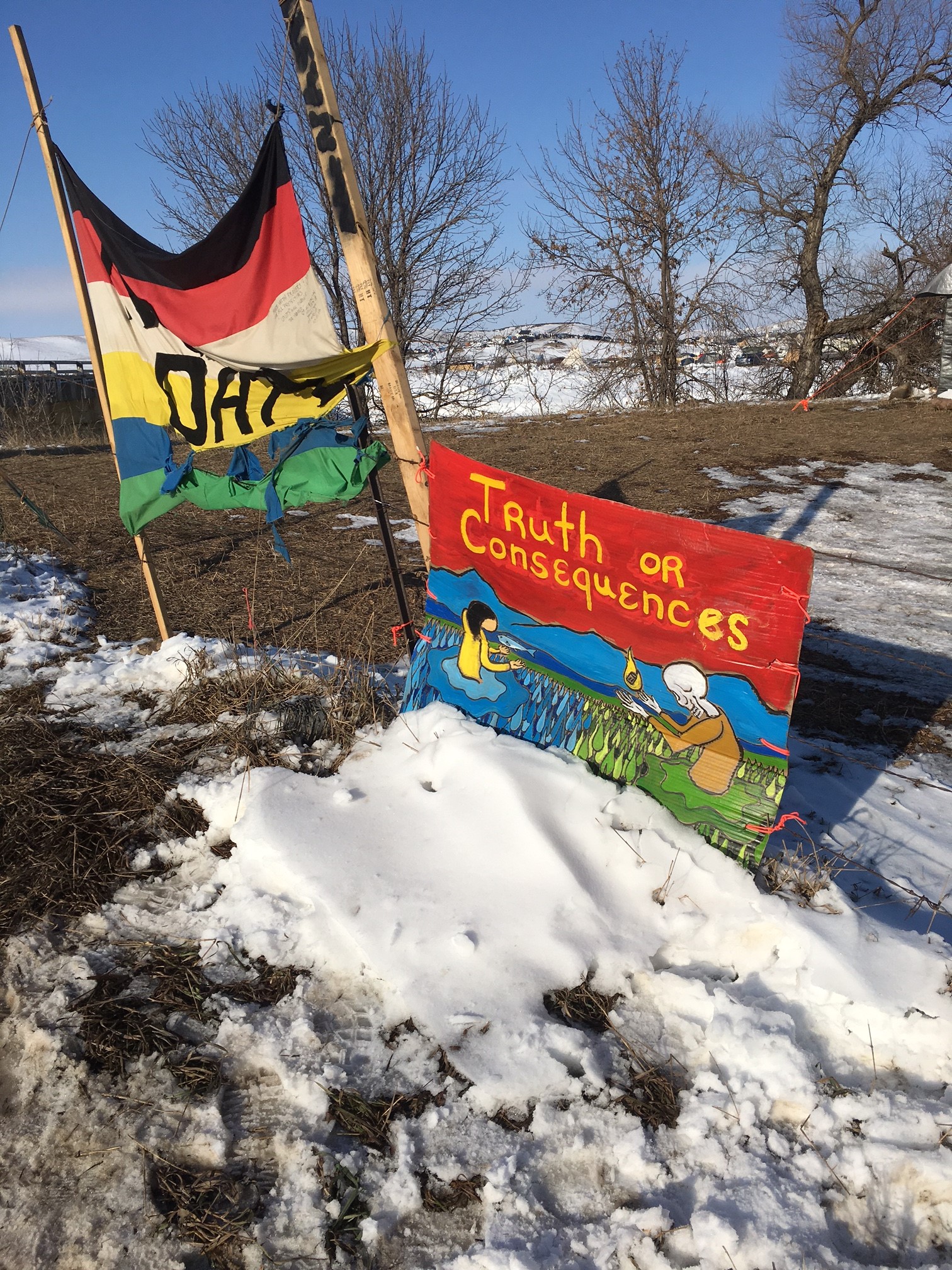 The entrance to Rosebud Camp

On Saturday afternoon, U.S. veterans began to arrive en masse. I could feel the excitement building throughout the camps. It was moving to see all of that support from members of the military. Some 200 people attended Sunday morning's Direct Action Meeting. We prayed. We were reminded this was a peaceful protest and we must not allow the police to antagonize us. We signed Jail Release Forms, deciding whether we would prefer to be bailed out immediately or wait with those we were arrested with. We were reminded not to waive our right to remain silent and that we should not expect the police to obey the law. Toward the end of the meeting, a veteran got up and said he had been used as a pawn in the past, sent to a foreign country to fight another battle over natural resources. He said he killed people while abroad and suffers daily because of it. He told the group he came to Standing Rock seeking forgiveness and atonement, so that he could move on from his past actions. I cried when he said that. I would also cry a few hours later, when I learned that the Army Corps announced they would not grant the easement.

I have never experienced anything near the depth of solidarity and resilience of this movement as I did during my two days at Standing Rock. The conditions out there are truly extreme. Every day now I check the weather in Bismarck and think of the 1,000 or more people still there. Today it is mostly sunny and 31 degrees Fahrenheit.

After having witnessed it, I now understand that Standing Rock is not primarily an environmental issue, as some have whitewashed into being. It is principally about indigenous sovereignty, founded on spiritual and cultural rights. Seeing all of the various stakeholders come together in solidarity is a significant moment in history, though of course it is the Lakota, who live on the land threatened by the DAPL, who will have to primarily bear the impact of the consequences if the pipeline eventuates.

The awe-inspiring work of the indigenous and tribal groups that led the fight against the pipeline has no doubt helped elevate the movement’s visibility. The intersections and teamwork of the myriad groups and communities who have joined them – environmental, racial justice, faith-based, and government accountability organizations – have helped as well. Some of the indigenous people I spoke with, however, attributed the success to the realization of a generations-old prophesy that predicted people will come together on this land to lead an uprising against a common enemy. A Water Protector told me she had asked a police officer on the bridge “What side would you have been on in Selma?” He didn’t have a response.

What you can do now

Though the month is drawing to a close, December is a global month of #NoDAPL action. Find an action near you, or plan your own. Donate to the Oceti Sakowin camp directly. Water Protectors are also asking the public to focus on divestment and defunding the pipeline. As part of this collective action, more than $22 million dollars have been withdrawn from banks that fund the pipeline. Visit Defund DAPL to learn more. Finally, visit Water Protectors Legal Collective to learn more about how you can support those who are providing legal support and maintaining a 24/7 presence on-site at the Oceti Sakowin camp.

Amy Myers is an Australian JD candidate in the final year of her law studies. She is interning at CCR and interested in government accountability, racial justice and prison reform.