It's like learning to walk for the first time

CCR client shares his experience of being released from solitary confinement
October 21, 2016

My name is Luis Esquivel. I spent close to 18 years in Pelican Bay SHU. Early in the morning, all in my mind felt the same as the first day when I arrived to Pelican Bay SHU as a young adult, February 1998. All In my mind seem the same, but it wasn’t, because now it was 2015. And for the first time in all those years, I was finally leaving Pelican Bay SHU, a place that took so much from me, from so many people, inside and outside. Well I was on a bus, a real bus, on the freeway going down south. All felt unreal, but it was real, still all seemed the same. Because for 10, 20, 30, 40 years you’re put away in a concrete box. Life goes on, but for someone in the SHU all seems the same.

Only thing that lets you know life is going on by is the mirror. That changes every time one looks at it. Now I’m on a bus and starting to realize that it was really happening, I was out of the SHU, leaving Pelican Bay, and so many memories as well. It hit me—nothing was the same. So much had changed. I knew my Mom and Dad were gone. I had to face reality. I would never be able to give my Mom that hug she wanted back in 2000. The last time I saw her, she said, “Mijo, ask the C/O, if I can give you a hug.” Those were her words. The SHU has a lot of our memories, good and bad. I lost one of my sisters, my older brother, my Mom and Dad in the SHU. 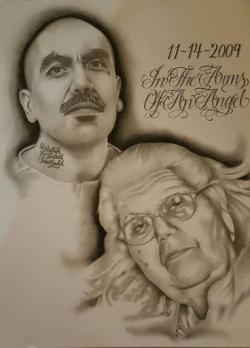 Drawing by Luis Esquivel of himself and his late mother.

Then, we prisoners, attorneys, outside support, families, friends, all the people—all as one, we beat CDCR and obtained one victory, our release from Pelican Bay SHU, any SHU, the right way. Walking with head held high.

So what were we able to do that we had not been able to in the SHU? Walking the yard, all seemed unreal, it was like learning how to walk for the first time. It felt, because of the size of the yard in the SHU, you get used to just walking a small yard.

Shaking someone’s hand, because for so many years we weren’t able to do that, just like on my first visit with my niece, Maribel, then with my sister.  My first hug. I don’t know how to explain it, but it was just hard to feel their hug. I felt their arms around me, but that was it. I couldn’t feel it in my heart. I think it’s because we were starting to lose that part in a human, the feeling emotional part. Am I on track? Am I making sense? It’s like what do you feel if you were to hug a tree? Because when you give a hug, you can feel the other person’s reaction. I was losing that. It’s scary. Now, little by little, it’s starting to feel a bit normal, now that feels good, knowing that all the brave, strong men that were in the SHU for 10, 20, 30, 40 years are able now to enjoy their families, the visit, the sun, fresh air. A normal conversation that feels a whole lot better, all the sacrifices, work. All was worth it. So thank you. Gracias, to everyone. To my family, sisters, nieces, nephews, our great legal time, outside support, CFASC, and the rest of the men that were in the SHU. Gracias.

All  as one. Let’s keep on pushing, work on our next victory. I’m ready.

P.S. Continue to push the agreement to end hostilities.