No hate in our name

All day yesterday I got text messages from queer friends. “Are you OK?” “OMG it could have been me.” “I had two friends who were there.” “How are you holding up?” “I used to go to Pulse all the time.” “Are you safe? Are you with family?” And by family, we mean other LGBTQI people, because too often, our biological families are not a safe place.

The bar – the gay bar, queer bar, LGBTQI bar – is the place we always went to be safe. For many of us, it was the first place we could be who we are, accepted by others. It was a community space, a place to meet people, make friends, maybe find love, maybe find a hot hook-up. Before there were LGBTQI communities centers, and where there are no community centers still, the bar was, is, our community center. A sanctuary in a society where condemnation and hate spew forth from our official religious sanctuaries.

And so when a gunman opened fire at the Pulse Club in Orlando on Saturday night, killing 50 people and injuring another 53, it shattered the lives not just of the victims and their families, born and chosen. It shattered queer and trans Americans’ place of refuge. We awoke Sunday to the knowledge that we all have a target on our backs, even in – or especially in – the one place we considered safe. That is exactly what hate crimes are designed to do. This was an act of political violence meant to hurt and threaten our communities.

Some in our LGBTQI communities live with a much greater threat than others. Pulse was celebrating Latin Night, and when the names of all the dead are released, we expect to confirm that the majority of victims were Latina, Latino, Latinx. Once again, it is LGBTQI people of color whose blood is on the hands of a homophobic and transphobic nation. 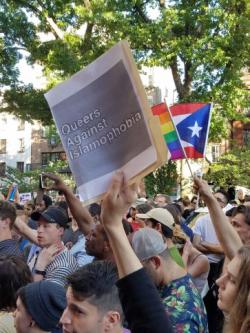 Vigil at The Stonewall Inn

This shooting did not happen in a vacuum. It is part of a growing backlash against (uneven and very incomplete) advances in LGBTQI civil rights.  In the last nine months, over 100 anti-LGBTQI bills have been introduced in state legislatures. Politicians routinely vow to roll back our rights in the name of moral values. Religious justifications for hate and discrimination – from many faith traditions, but most prominently from Christian denominations that represent a majority of Americans – saturate the very air we breathe. And even after the massacre, the Bible was used as a weapon to attack LGBTQI people. Just hours after the shooting, Texas Lt. Gov. Dan Patrick tweeted these words of Galatians 6:7, "Do not be deceived: God cannot be mocked. A man reaps what he sows."

The pervasiveness of Christian anti-queer attitudes and actions makes the predictable anti-Muslim scapegoating that started immediately after the shooting all the more galling. Had the shooter been white from a Christian background, you can bet that comments about his being disturbed and unstable (from his ex-wife and co-worker) would have led to his being treated as a lone wolf and the story framed as one of mental illness. Instead, Muslims all over the world are once again required to issue press releases explaining that Omar Mateen’s actions are not representative of all Muslims. I’m still waiting for Christian organizations to make statements about how Dylann Roof and Robert Dear don’t represent all Christians.

Instead, the very same people who have contributed to the epidemic of bullying and homelessness among queer and trans youth – and again, disproportionately youth of color – are now using the dead bodies of LGBTQI people to prop up their anti-Muslim hate.

Forty-seven years ago, the most vulnerable members of the LGBTQI community changed history at another gay bar – the Stonewall. It’s fitting that the bar that occupies that space now, the Stonewall Inn, is still the touchstone for our community/communities. It’s where we went when the Supreme Court overturned sodomy laws, where we comforted each other when three gay men were gruesomely tortured in the Bronx, where we cheered when New York passed marriage equality and the Supreme Court made it the law of the land.

It is where we will be tonight at 7, vowing through our tears, our rage, our grief, to never go back and to stand in solidarity with our Muslim siblings.