Voices of Progressive Iraqi Organizing Come to New York, at Against All Odds: A Night Celebrating Iraq

On June 25th, New Yorkers came together to learn about progressive Iraqi organizing on the ground and to celebrate the hope that such struggles are bringing to a place that is all too often characterized, in both media and scholarship, as one wrought by war, violence, and sectarianism.  The book launch event for Against All Odds: Voices of Popular Struggle in Iraq (AAO), held at Alwan For the Arts and co-hosted by the Center for Constitutional Rights (CCR) and War Resisters League (WRL), was at capacity—a  testament to the enthusiasm for hearing the unique voices of Iraqi feminists, labor organizers, environmentalists, and protest movement leaders. 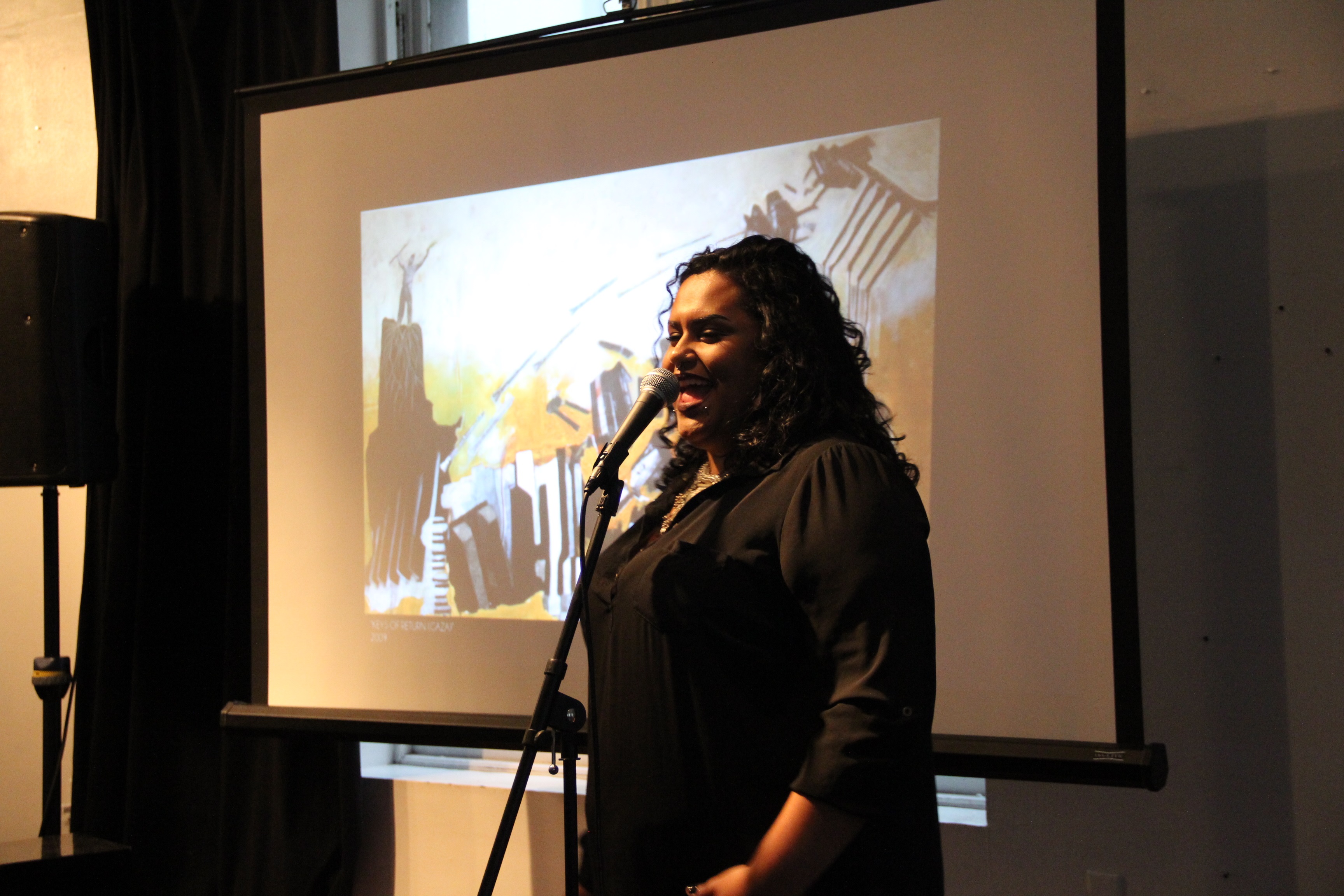 Nico Fonseca, Bilezikian Intern with War Resisters League and MC of the event “Against All Odds: A Night Celebrating Iraq,” and the artwork of Sundus Abdul Hadi in the background. 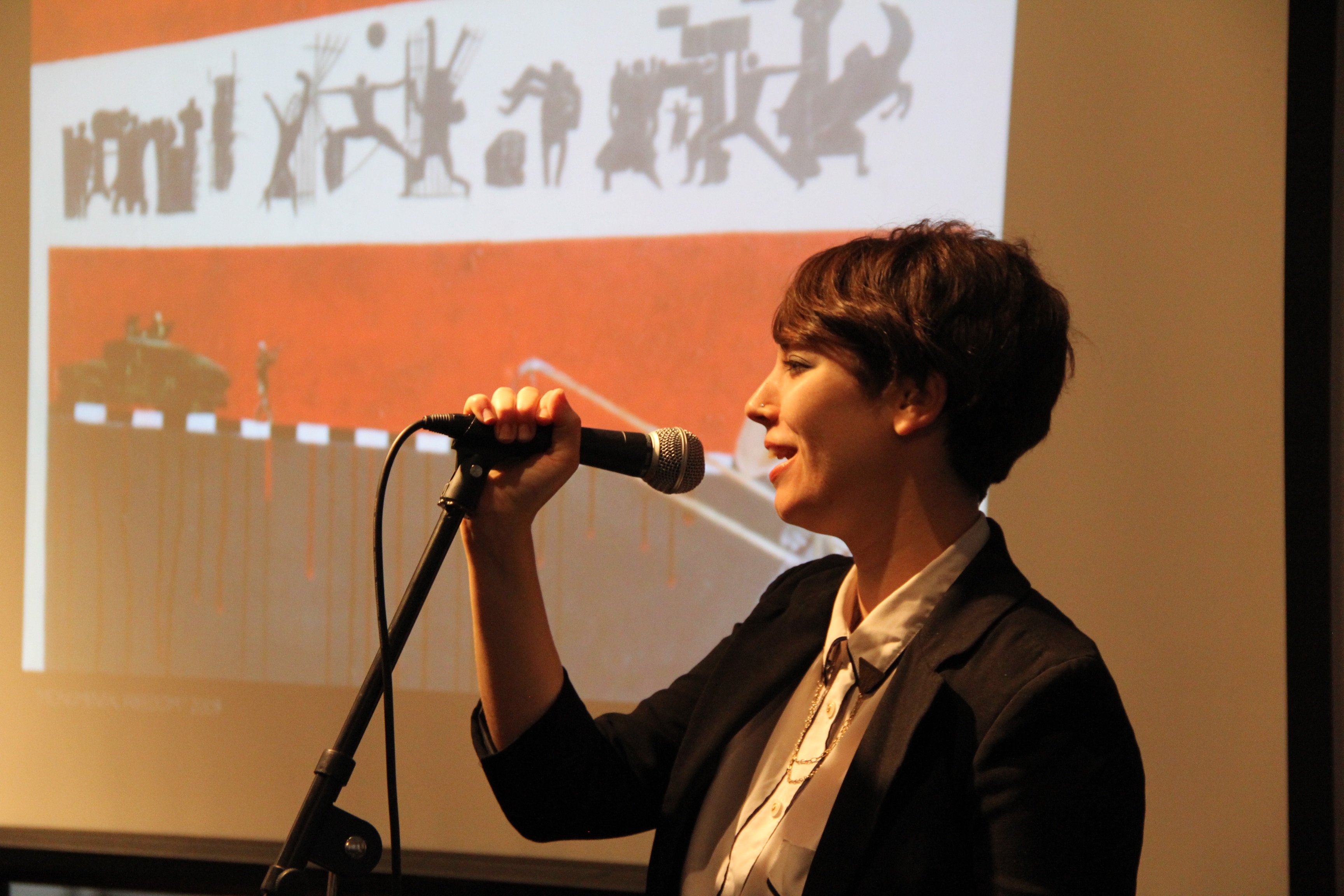 Leah Todd, Legal Worker and Legal Program Associate at CCR, and the artwork of Sundus Abdul Hadi in the background.

The night began with an empowering video interview with Jannat Alghezzi of the Organization of Women’s Freedom in Iraq (OWFI), as well as an overview of the Right to Heal initiative by CCR’s Leah Todd. Book readings of AAO, including a reading by the book’s author, Ali Issa of WRL, were interspersed with a performance by Iraqi-Canadian hip-hop artist The Narcicyst and projected artwork by Iraqi-Canadian multimedia artist Sundus Abdul Hadi. Video of the night celebrating Iraq can be seen below. 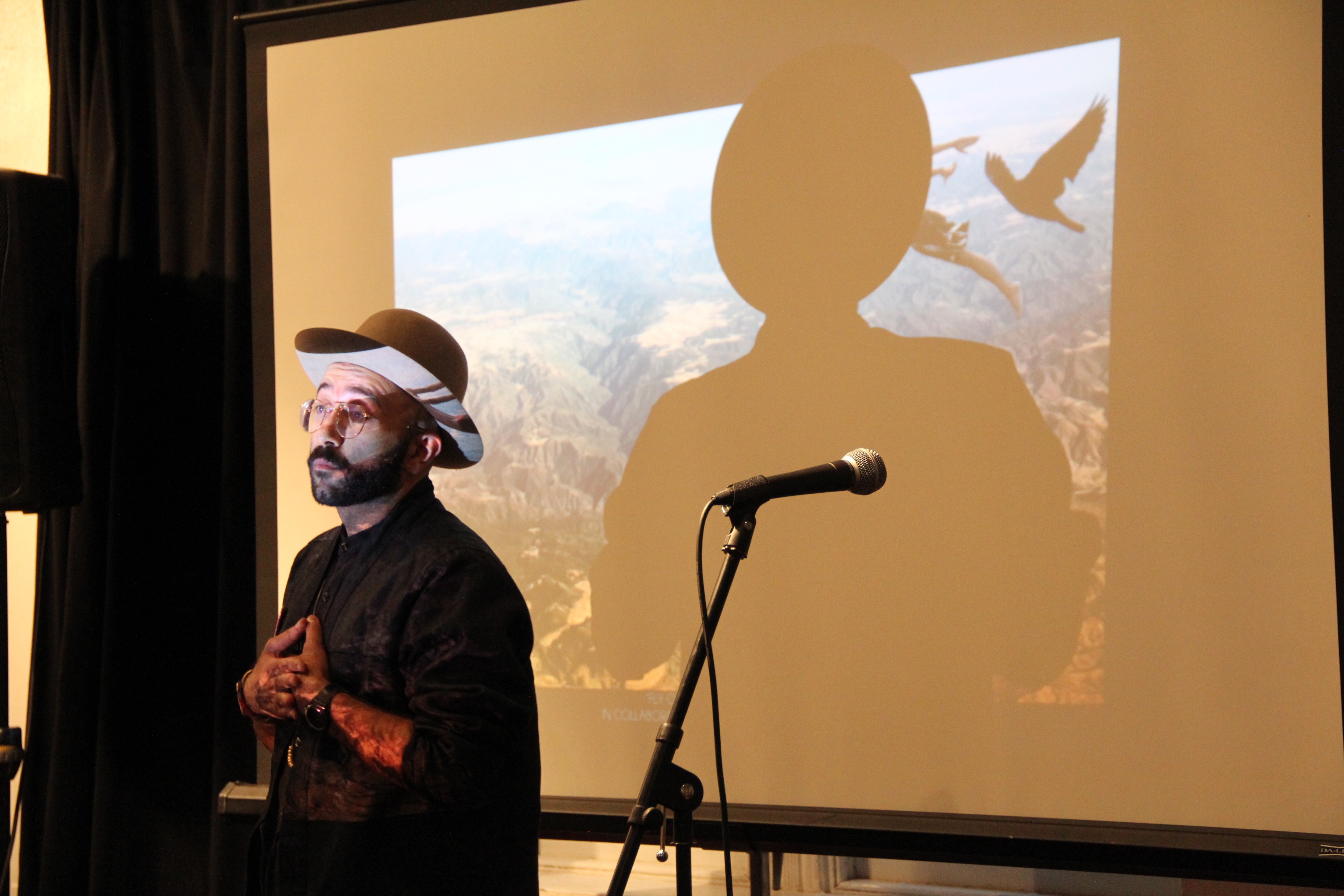 Hip-hop artist Yassin Alsalman, also known as Narcy or The Narcicyst, and the artwork of Sundus Abdul Hadi in the background.

The event’s speakers emphasized that the stories in the book, the most recent of which was written in December 2014, are those of ongoing struggles. The leaders whose voices are presented are still fighting their oppressors today, and they need support. In a recent letter from Falah Alwan, president of the Federation of Workers’ Councils and Unions in Iraq (FWCUI), to Ali Issa, Alwan highlighted two pressing needs of the Federation.  Once they are met, they will push FWCUI’s efforts forward and allow for a broader base, both in Iraq and internationally, to get involved with and support their work. Namely, while they used to have an organizational web page – the first Iraqi union website – FWCUI currently lacks a web presence, and production of their newspaper, Workers’ Councils, recently came to a halt, both due to capacity needs. Further, aside from being a prominent leader of Iraq’s largest workers’ protests, FWCUI is currently organizing a school for workers’ cadres in Baghdad, with the planned participation of comrades from Basra, Samarra, Kut, and other cities. Providing transportation and lodging for those outside Baghdad is the kind of organizing the Federation remains committed to.

Another group featured prominently in the book and at the event is OWFI, known most prominently for their gender justice work, though their cross-movement approach has put them at the forefront of several struggles. They are currently working to lift the ban on local NGO-run shelters, create access to identification cards necessary for women to access public services, provide access to healthcare for survivors of gender-based violence, and lift the ban on locally run radio stations. To learn more about this work, you can subscribe to OWFI’s newsletter and support their work financially here.

FWCUI and OWFI are only two organizations of the amalgam of resilient Iraqis who are building movements, from Uday Al-Zaidi of the Popular Movement to Save Iraq, to Nadia al-Baghdadi of the Save the Tigris and Marshes Campaign. You can learn more about these inspiring efforts, support them, and get involved with Iraqi organizing on the ground by emailing ali@warresisters.org.

Against All Odds: A Night Celebrating Iraq - Ali Issa

Ali Issa, author of Against All Odds: Voices of Popular Struggle in Iraq and National Field Organizer with War Resisters League speaks about the significance of the book.

A Night Celebrating Iraq: Against All Odds - Amnah Almukhtar

CCR’s Amnah Almukhtar reads an excerpt from Against All Odds: Voices of Popular Struggle in Iraq and relates the book to her personal experience.