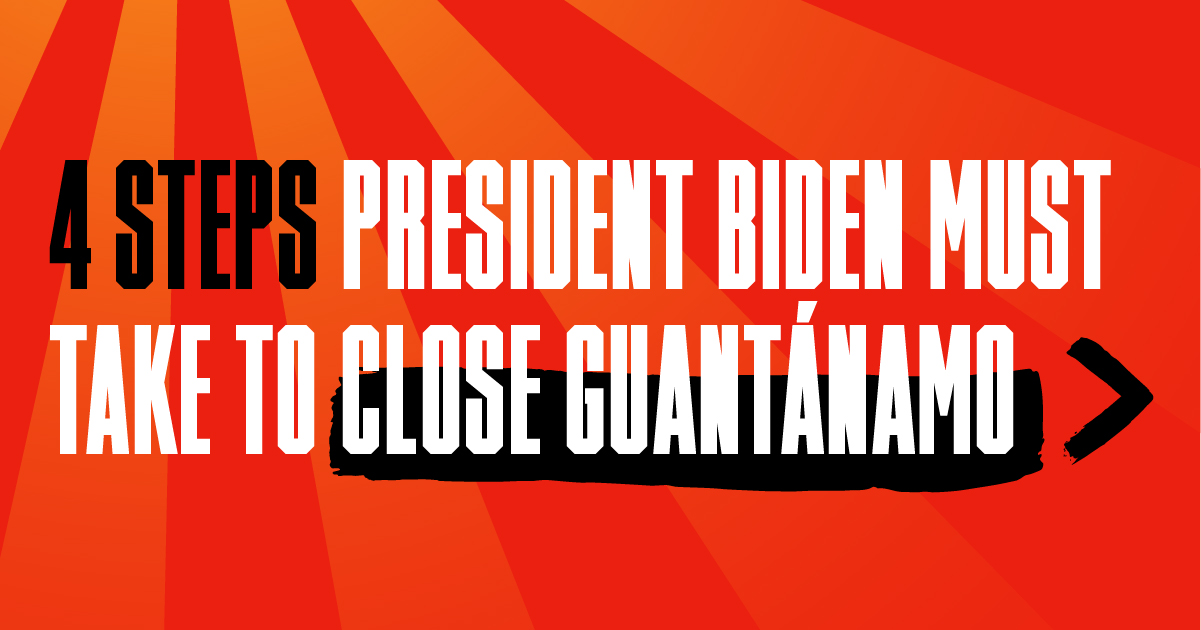 President-elect Biden has been a supporter of closing the Guantánamo Bay prison since he was a senator. The Center for Constitutional Rights welcomes his support as president, and calls on him to take swift and decisive action to finally fulfill the Obama administration's promise. As president, Biden can and must close Guantánamo.

Since the prison opened in 2002, the Center for Constitutional Rights has challenged indefinite detention without charge or fair trial at Guantánamo, fought for accountability for torture, and secured the release of dozens of men. We represent six men who are still imprisoned, nearly two decades after they were taken into custody: Sufyian Barhoumi, Sharqawi Al Hajj, Mohammed al Qahtani, Abdul Razak Ali, Guled Hassan Duran, and Majid Khan.

On January 11, 2021, the prison will enter its 20th year of operation. Forty Muslim men remain, and the vast majority are not, and never will be, charged with a crime. The military commissions have not provided any measure of justice—not for the families of 9/11 victims or the survivors of brutal torture who have been denied a fair trial. Each year, Guantánamo costs taxpayers an estimated $540 million to operate ($13.5 million per detained man), and the human cost of nearly two decades of arbitrary and cruel detention for those men is immeasurable.

Both the Bush and Obama administrations called for the prison's closure, and in total released over 700 men. However, transfers came to a complete standstill under Trump, who transferred only one person. When Biden takes office in January 2021, he will be the fourth president to preside over the prison. In his first year in office, he must reckon with the 20th anniversary of 9/11, and Guantánamo and all that it symbolizes will be his burden to resolve. He inherits a prison of aging men in rapidly deteriorating physical and mental health, for whom continued detention could be a death sentence.

President Biden should heed the lessons of the past and take bold and decisive action on Guantánamo during his first days in office. He need not – indeed, should not – wait for Congress to act. He has the authority and power to end indefinite detention without charge or trial, close Guantánamo, and end this lawless chapter of our nation's history once and for all. He can start by taking the following steps.

1. Appoint senior officials in the White House and State Department to be responsible for carrying out the mandate to close Guantánamo

President Biden must show his commitment to closing the prison by immediately appointing a senior official in the White House who has the stature and authority to carry out efforts to close the prison, including by resolving interagency disputes related to transfers. In addition, Biden must appoint a special envoy, or create a similar position, within the State Department who will be responsible for negotiating detainee transfers with foreign governments and ensuring that transfers and the conditions after release meet the United States' international human rights obligations, including the obligation to not send people to a country where they would face torture, mistreatment, or other punishment.

2. Transfer without any further delay the nine men already cleared for transfer, including Center for Constitutional Rights client Sufyian Barhoumi

Nine men have been cleared for release, including many who were cleared by previous administrations. All relevant U.S. military, law enforcement, and intelligence agencies have unanimously determined that there is no longer a reason to detain them. The Biden administration must immediately repatriate or resettle these men.

Under the National Defense Authorization Act (NDAA), the Secretary of Defense must certify a set of conditions prior to foreign transfers (including notifying Congress 30 days in advance). In cases where countries of transfer are not permitted under the NDAA, there are other ways (outlined below) that the president can still exercise his authority to effect those transfers.

3. Resolve the status of the 19 men in the "indefinite detention" category

The administration can and should resolve the status of the men in this group without further delay. The government has had more than ample opportunity to decide whether to bring charges against the individuals who remain in Guantánamo. For those who are not cleared, but who have not been charged by now, nearly two decades after their capture, continuing indefinite detention is unlawful and indefensible. The U.S. government simply cannot hold these men forever. The Biden administration can and must transfer all who are not charged to their home countries or to safe third countries.

The Biden administration can swiftly resolve the status of these men by not contesting habeas cases. Following the Supreme Court's 2008 Boumediene decision that men detained at Guantánamo have the constitutional right to challenge their detention in federal court, individuals continue to litigate habeas corpus cases and seek relief through the courts. While the Department of Justice has reflexively contested habeas cases, there is no requirement that it does so. Indeed, the Obama administration withdrew its opposition in one case, which led to the individual's transfer. The president should direct the DOJ to take a bold approach to negotiate the settlement of habeas cases, which may include court-approved stipulations that some detained men should be transferred to particular countries, or uncontested court orders of release. Doing so would allow the president to expedite transfers that would be exempt from certain transfer restrictions. Congress cannot override a judicial order for transfer.

Protracted reviews by the Periodic Review Board are neither necessary nor in the interests of swift resolution. However, should the government continue that process, it must be forward-looking. The process must consider factors such as: prolonged detention without charge; credible allegations of torture and other cruel, inhuman, and degrading treatment; and compromised health, scope and complexity of projected medical needs, and Guantánamo's limited medical-care capabilities.

President Biden should abandon all military commission prosecutions and ensure a fair trial in federal court to any person who is currently charged before the commissions. Bringing charges against the small subset of men to federal courts is a critical piece of any closure plan. While there are currently congressional restrictions on transfers to the U.S., those restrictions would not bar all such transfers under all circumstances. In addition, individuals can enter into guilty pleas via videoconference remotely from Guantánamo in an Article III court, and, with the consent of all parties, the administration can negotiate and accept pleas and effectuate sentences. Those individuals could then serve out any remaining time on their sentences abroad, subject to terms of their plea deals and agreements with transfer countries.

What We Do: Guantánamo