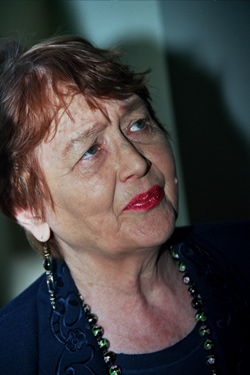 The Center for Constitutional Rights mourns the passing on August 3rd 2009, of a core member the CCR family, Marilyn Clement. A lifelong social-justice activist who worked with Martin Luther King, Jr. in Atlanta in the 1960s, Marilyn served as CCR’s Executive Director from 1976 to 1989, and continued working with the Center as an active member of our board of directors.

Marilyn was fond of quoting civil rights activist Ella Baker, who famously said, “We who believe in freedom cannot rest.” In her own life, Marilyn worked tirelessly for a wide range of progressive causes.

During her twelve years as Executive Director, Marilyn's vision and leadership shaped CCR into a nationally renowned instrument for social justice without compromising the principles which motivate our work. Her initiative to open CCR South led to a docket of voting rights cases which had a profound impact on the American South. CCR’s Movement Support Network, which Marilyn championed, broadened our work to include community education and organizing. The Ella Baker Program, which brings progressive law students to the Center each summer, may be one of Marilyn’s most enduring contributions to CCR. The program has trained hundreds of law students to be effective social justice and legal advocates in the service of the people.

Marilyn was CCR’s Executive Director during the landmark Filartiga case, which pioneered the use of the Alien Tort Statute (ATS) to enable victims of human rights abuses from anywhere in the world to sue the perpetrators in U.S. courts. While at CCR, Marilyn also helped found the National Anti-Klan Network. As CCR President Michael Ratner notes: “Marilyn was incredibly courageous putting herself into people’s struggles, especially on issues of race.”

Marilyn later headed the U.S. office of the Women’s International League for Peace and Freedom and helped organize the WILPF Peace Train to the International Women’s Congress in Beijing in 1995. When Rep. John Conyers introduced legislation in 2003 for a national, single-payer health care system, Marilyn decided to devote her energies to building a movement to support that important cause and she founded the organization, Healthcare-NOW! After being diagnosed with multiple myeloma in June 2008, Marilyn continued to serve as Healthcare-NOW’s National Coordinator and helped train a younger generation of leaders to keep the movement growing.

Marilyn Clement possessed a remarkable combination of passion, creativity, personal honesty, extraordinary organizing skills, and a great sense of humor and friendship that all of us here at CCR will deeply miss.