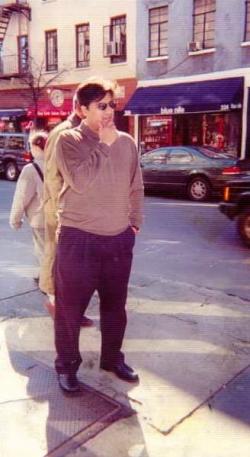 Ahmer Iqbal Abbasi currently lives in Pakistan with his wife and four children and works as a supervisor at a construction company. Ahmer is a plaintiff in Ziglar v. Abbasi (formerly Turkmen v. Ashcroft), a lawsuit filed in 2002 on behalf of a class of Muslim, South Asian, and Arab non-citizens swept up in connection with the 9/11 investigation. From September 2001 to August 2002, Ahmer was detained at the Metropolitan Detention Center (MDC) in Brooklyn, New York, where he was held in harsh and punishing solitary confinement in the Administrative Maximum Special Housing Unit (ADMAX SHU). Like nearly a hundred other men, Ahmer  was detained as a "terrorism suspect" based solely on his race, religion, ethnicity, and immigration status, and abused in brutal detention conditions for the many months it took the FBI and CIA to clear him of any connection to terrorism.

In 1993, Ahmer arrived in the United States with a visitor visa, and subsequently sought political asylum from Pakistan. After his application was denied, he remained in the U.S., and worked hard to make money as a cab driver in Manhattan, and eventually put his savings towards purchasing a small grocery store. In his spare time, he swam in the pool at a city gym and went to the movies on the weekends. He received his GED in 2001, and hoped to pursue training in IT skills. "Life was beautiful in New York," Ahmer recalled. "I was living my life like an average American. . . I think I had a perfect life in the USA."

That all changed on the morning of September 25, 2001, when Ahmer was arrested by the FBI. At the police station, he was interviewed at length about his religious beliefs and practices. Ahmer was not told why he was being arrested, but later learned that he came to the FBI's attention because a house guest had presented a false social security card at the New Jersey Department of Motor Vehicles. The FBI became interested in him on the report that the card, and a passport, had been left by "a male possibly Arab" using his address. Based solely on that information, Ahmer was held as "of interest" to the 9/11 investigation. When questioned the next day at an INS detention center, Ahmer acknowledged that he had entered into a fraudulent marriage in order to obtain a green card, and stated that he would like to be deported. He recognized the mistakes he made to become a citizen and attain what he believed to be the American Dream. Ahmer could have been deported by the INS within weeks, but was instead detained in harsh conditions at MDC.

"The days I spent behind bars were the worst days of my life. I was absolutely unaware of the charges. Officers coming to us telling us that we are the suspected terrorists made us believe that we are not in the USA, but somewhere in Afghanistan. I kept asking myself: what is wrong with these people, what made them believe that I was a culprit? I know they knew from the first day that they got a wrong guy, but they kept me in custody long after that."

Ahmer was placed in the ADMAX SHU without justification. He was denied access to the outside world, including an attorney and the Pakistani consulate, arbitrarily and abusively strip-searched, subjected to sleep deprivation and interference with his religious practice, denied basic personal items like soap and toilet paper, and deprived of adequate food. The guards were also verbally abusive, and referred to Ahmer and the other detainees as "fucking Muslims" and "terrorists."

“I thought maybe that's how they keep and treat people,” Ahmer said about his experience in the SHU. “But… when they transferred me from SHU to the general population, I felt like I [had] come back to the world. That's when I realized where I had been for four and half months was no less than a grave.”

The FBI never developed any evidence to tie Ahmer to any terrorist activity, or indicate that he might be dangerous. His identity as a Muslim from Pakistan was the only reason he was suspected of a connection to terrorism. Inter-agency bureaucracy and delays resulted in his near eleven-month detention.

On February 26, 2002, Ahmer was charged with three minor criminal offenses, to which he pled guilty in June 2002 and was sentenced to time served. He was deported on August 20, 2002, and was unable to recover the earnings and savings he had deposited in the bank. Starting a new life in Pakistan was difficult, and he continues to face challenges, including those related to his detention, which he describes to this day as a "nightmare." He hopes that a positive judgment in Ziglar v. Abbasi will enable others to seek justice as well.